For The Love Of Books.

FOR THE LOVE OF BOOKS! People take reading books for granted, especially now that they are available electronically. Not so long ago, there was a whole generation of children that did not have access to books in this country, not because there was a lack of books, nor because they were illiterate, but because of the color of their skin. Black children had no right to step across the threshold of a public library and read or borrow books.

Back in 1963, London Steverson, a young black man, a senior at an all black Woodstock High School, in Memphis, Tennessee, wanted to write a senior term paper on the topic of martial arts. The school had only a small library with a limited selection of books. There were no books on karate, taekwondo, judo, aikido, or kung fu in the school library. In fact there were no books at all on martial arts. So, when Mr. Steverson inquired concerning any other library that he could possibly use for his research, the school librarian, Mrs. R. J. Roddy, informed him that there was a public library in Memphis, TN. It was a much bigger one, and it had a large selection of books on many topics, but it was for whites only. Before Mr. Steverson lost all hope for his term paper, Mrs. R. J. Roddy told him, she could call the librarian in that other "whites only" library and see what books they had on the subject. It turned out that there were quite a few books on martial arts. The library sent over a two page list of titles. Mr. Steverson looked through the list and picked out some books that he thought he could use as references. Mrs. R. J. Roddy called back and told the librarian which books Mr. Steverson wanted, and they sent the books to his school by special delivery. He does not remember whether his books were the only ones sent to his school, but looking back, he is amazed at what lengths they were willing to go to keep him out of a public library. But unbeknownst to him and to everyone around him, a little seed was planted in Mr. Steverson's heart and soul, when he was denied access to the Memphis, Tennessee public library. 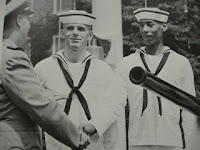 "It was not until a few years later when I was a cadet at the U.S. Coast Guard Academy (USCGA) that the implications of the incident really hit home" he said. "I was now at an all white college and had access to a well stocked library, not like the small library at Woodstock High, which had little more than some magazines, news papers, periodicals, and Readers' Digest Condensed Books."All this was taking place during the 60s when the Civil Rights Movement was in full swing. People were marching and sitting-in, and highlighting the inequities of the segregated public accommodations. "The more I used the library at the USCGA, the more I became aware of the great deprivation that I had suffered in high school in Memphis, TN. And many people all over the South were still suffering." he said.

So he began to develop a real love for books and an appreciation for what books could do for the spirit. He began to go to the drug stores in New London, Connecticut, and buy paperback books. At first, he bought any book he could afford, like James Mischner's "Hawaii'. He kept and treasured every book he purchased and slowly they began to stack up. Then, later as he traveled to foreign countries, he expanded his collection with foreign books. He joined book clubs, The Book of The Month Club, and later The Folio Society.

He has visited and used many libraries all over the country, except the one in Memphis. One day, more than 40 years later, when he visited Memphis, TN, his nieces and nephews asked him if I had been to the Benjamin Hooks Public Library. He said no. In fact, he never really associated going to a public library in Memphis, TN, based on his childhood experiences. "The idea felt strange to me because I had never been inside the Memphis Public Library, I did not think I was welcome" Mr. Steverson stated. He took his wife and children and has accomplished a major milestone in his life 44 years later. He was finally able to step foot inside the public library in his hometown, and on top of it all, apply for library card. The lady was an older white lady from Connecticut, who was processing his application. The lady was surprised that a 60 year old man born and raised in town, had never had a library card there. "I explained to her that when I had lived in Memphis, Blacks were not allowed to use the public library, and I had left Memphis at age 17." She was amazed and I was pleasantly taken aback that my minor children and I were getting library cards for the first time at the same time." His whole family became a member as a symbol to his freedom to read books anywhere.

"One day I looked around and I had so many books I did not know what to do with them" he said "nearly every room had wall to wall bookshelves filled with various books. Every room in his house had books in it, from the front door to the back door. Within 6 months of getting the library card, he moved to Hungary. "When the packers came to our home with boxes, we were surprised that the bulk of out possessions were books. We had over 400 boxes of books." There were high school, college, and law school text books, along with novels and books of every description. They were the accumulation of over 45 years of collecting books.

When he arrived to Hungary, his wife began to take him to visit the elementary and high schools she had attended. He found that every school was teaching English diligently to their students, and they discussed the idea of donating some of the books to her alma maters' libraries. Then, one day he visited the County Library in Veszprem. (ekmk.hu) To his surprise there was an American Corner in the library. American Corners are a State Department supported program that provides, without American personnel, a public diplomacy outpost - library, discussion forum, program venue and Internet access - available for the use of the local population in a host country. The American Corner had two shelves of English language books and plenty of space. The American Corner was also near the local university. Mr. Steverson decided that this was the best place to donate his books because they would get the most exposure to English speaking and reading people. After showing the Director some samples of the types of books that he had, she was delighted to accept all the books he could donate. The donation was called the Steverson Book Collection and since the initial donation, the collection has expanded from one corner to three corners in Hungary, helping students and teachers, Hungarians, foreigners and ex-patriots to have access to a wide variety of books and knowledge. The seed planted in 1963 has come to grow, blossom and bear fruit. Mr. Steverson has fulfilled a lifelong dream of helping young and old alike to have access to books and learning. His dream carried him even further than he had ever dreamed, giving him the opportunity to help a whole nation have access to something that he did not as a child. 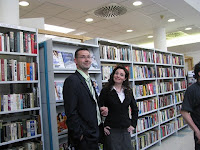 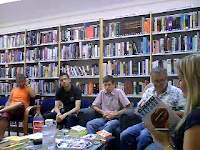 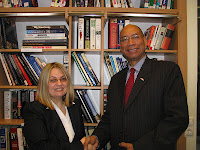 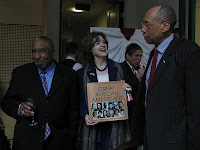 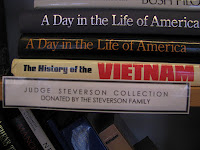 Posted by ichbinalj at 1:05 PM