Who Is Robert W. Patterson and Why Do Homosexuals Hate Him?

Robert W. Patterson, a right-wing commentator turned acting associate commissioner at the Social Security Administration’s (SSA) Office of Strategic and Digital Communications, once railed against married women, homosexuality, and condoms, according to a series of clips gathered by liberal watchdog Media Matters for America.
In a 2011 since-removed Washington Examiner op-ed, Media Matters reports, Patterson wrote that the government “has facilitated the movement of mothers out of the home economy and into the market economy, undermining the family as an economic unit, marriage as a lifelong partnership, and the well-being of children.”
He has also reportedly worked for two anti-gay organizations, criticized the American Psychiatric Association for not listing homosexuality as a mental disorder, and advocated for conversion therapy, a practice that has been resoundingly debunked. Media Matters also cites a report from The Philadelphia Inquirer, which summarized a piece Patterson co-wrote for the conservative journal Family in America. The piece, the Inquirer notes, summarizes recent family-related studies—and covers one study which claims that condom use deprives women of the “remarkable” chemicals in semen. The study also claims that “semen-exposed women” performed better on cognitive tasks. 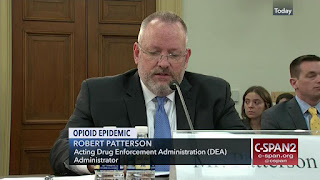 (Washington, DC, Jan 11, 2019) — The following is a statement from Alex Lawson, Executive Director of Social Security Works, in reaction to a Media Matters exposé on the outrageous misogyny and homophobia of Robert W. Patterson, who Donald Trump appointed as an Associate Commissioner at the Social Security Administration:
“American workers earn their Social Security benefits with every paycheck. It is the responsibility of the federal government to competently and fairly administer those benefits.
Donald Trump has made a mockery of that responsibility by appointing a horrific bigot and crackpot, who seriously believes that condoms rob women of “remarkable chemicals” in semen, to a key leadership position at the Social Security Administration. Robert W. Patterson must resign immediately. ”

Part of the Trump administration’s numerous vacancies, the president claims, are by design. Trump has frequently decried the numerous White House staffing positions as government waste, saying in an October interview with Forbes that his administration “[doesn’t] need as many people.”
“I’m generally not going to make a lot of the appointments that would normally be — because you don’t need them. I mean, you look at some of these agencies, how massive they are, and it’s totally unnecessary. They have hundreds of thousands of people,” Trump told Forbes.
Experts, however, say that simply not staffing his administration doesn’t work the way Trump claims.
“There is a legitimate case to be made for de-layering government, for reducing the number of political employees, but you have to do that intentionally,” Max Stier, president of the Partnership for Public Service, told the Guardian. “Failing to nominate people in a reasonably quick fashion isn’t the same as intentionally deciding, saying that you want to remove certain jobs from government so that you can make it more streamlined. The latter would be, I think, welcomed.”
Many of the vacant positions, NPR noted in October, are temporarily filled by career civil servants, who experts said may be more tentative and risk-averse than political appointees.
These civil servants, Stier explained to NPR, are “the proverbial substitute teacher; everyone knows you’re not around for the long term. Whatever decisions you make aren’t going to necessarily stick. You’re not likely to take the long-term view or handle the most difficult issues.”
Furthermore, these interim employees’ tenures are now surpassing their legal limits. NPR reported in November that the Federal Vacancies Reform Act gives presidential administrations 300 days to fill political appointments, in order to prevent administrations from simply circumventing the Senate confirmation process by appointing someone to an acting role indefinitely. Trump’s administration has blown past the 300-day mark, meaning that decisions made by an employee in an acting capacity could be subject to a court challenge as being improperly made.

Well, I offer no apology for what I am posting, for this is truly how I feel. This is my opinion, not a debate. If you disagree, or find my position offensive, I'm perfectly fine with that.
I have lived through several United States Presidents prior to our current President Trump. In my lifetime, I have never seen nor heard of a President scrutinized over every word he speaks, humiliated by the public to the point of disgrace, slandered, ridiculed, insulted, lied to/about, threatened with death, had his wife and our First Lady disrespected, & his minor child insulted, threatened & harassed.
I am ashamed and saddened by the ruthless, meanspirited, hateful, cruel, biased people who display themselves as having no civic pride, morals, ethics, decency or respect for our country's traditions and values. My elders and teachers taught me many yrs ago to respect our President, whether I voted for them or not. All the news stations & reporters who feel they have the right to perpetuate blatent lies and fabricate "facts" for a "good story" are dividing our country beyond belief. Many only report the negative "news" and never the accomplishments of our President. If people do not research everything put out by the MSM, they are left to believe all the hate mongering news. This is leading to so much intolerance that I feel we are nearing the brink of a civil war! No other President that took the oath of office, has been on the news 24/7, scrutinized for their every word, facial expression, decision, handshake, what he eats... NO, he is not perfect, far from it! No President or person is, including you and I!!!!! Yes, he makes stupid comments and doesn't use the flowery language of a "professional politician". However, I believe he truly loves the United States of America and works tirelessly to make things better for us all. He is very different than what we've become accustomed to, thank goodness. The people who would rather see our country fail than help him do his job need to stop. I was always taught "If you can't be part of the solution then at least don't be part of the problem". I personally want our President Donald Trump, as I did his predecessors, to succeed. To hope for failure is INSANE. United we stand; divided we fall.

Posted by ichbinalj at 4:01 PM No comments:


Whenever a court renders a judgment favorable to a claimant under [Title II of the Social Security Act] who was represented before the court by an attorney, the court may determine and allow as part of its judgment a reasonable fee for such representation, not in excess of 25 percent of the total of the past-due benefits to which the claimant is entitled by reason of such judgment.

The opinion, written by Justice Clarence Thomas, first applied a plain-meaning approach. The court quoted the Concise Oxford Dictionary of Current English for the definition of “such”: “[o]f the kind or degree already described or implied,” and declared that “the only form of representation ‘already described’ in § 406(b) is ‘represent[ation] before the court by an attorney.’” Based on this statutory language, the court announced that “the 25% cap applies only to fees for representation before the court, not the agency.”

Although the court began its analysis by quoting an earlier opinion: “We begi[n] with the language of the statute itself, and that is also where the inquiry should end, for the statute’s language is plain,” the court did not end the inquiry with the dictionary definition of “such.” Instead, it also considered other provisions of the statute and found that the structure of the statute and its other provisions were consistent with its interpretation of the statute.
The court noted that two different provisions, 42 U.S.C. § 406(a) and 42 U.S.C. § 406(b), address different stages of representation and calculate fees differently. Section 406(b) applies to court representation and imposes a flat 25 percent cap on fees for court representation. Section 406(a) applies to representation before the agency and provides two methods for determining fees for agency representation. One method, Section 406(a)(2), applies to fee agreements and caps fees at the lesser of 25 percent of past-due benefits or $6,000. The second method, Section 406(a)(1), applies when there is no fee agreement and authorizes the agency to set any fee, including a fee that exceeds 25 percent of past-due benefits, as long as the fee is “reasonable.”
The Supreme Court concluded that it would make little sense to apply the Section 406(b) court-stage cap to agency-stage Section 406(a) fees or the aggregate of Sections 406(a) and 406(b) fees. First, because many claimants never litigate in court, it would be incongruous to impose a 25 percent cap on agency fees based on a statutory provision regulating representation before a court. Second, applying the 406(b) cap to agency representation without a fee agreement would impose a limitation that Congress did not include in the relevant statutory provision. According to the court, “[i]f Congress had wanted these fees to be capped at 25%, it presumably would have said so directly in subsection (a), instead of providing for a ‘reasonable fee’ in that subsection [§ 406(a)(1)] and adding a 25% cap in § 406(b) without even referencing subsection (a).”
The court then turned to amicus Amy Weil’s argument that, when the statute is read as a whole, it is evident that Congress intended to place a cumulative 25 percent cap on attorney’s fees. The court acknowledged that Weil was correct in noting that the Social Security Administration only withholds a single pool of 25 percent of past-due benefits from which to pay fees for both agency and court representation. The court, however, noted that the single pool was the result of agency policy and the statute itself authorizes two pools of money for direct payment of fees. More importantly, according to the court, “the amount of past-due benefits that the agency can withhold for direct payment does not delimit the amount of fees that can be approved for representation before the agency or the court.” Until 1968, the Social Security Act allowed fees for successful representation before the agency but did not provide for direct payment from past-due benefits. In addition, under current “§§ 406(a)(1) and (4), the agency can award a ‘reasonable fee’ that exceeds the 25% of past-due benefits it can withhold for direct payment.”
The outcome is not surprising in light of the clear text of the statute and the fact that neither party defended the judgment below. Although Weil “ably discharged her assigned responsibilities” as amicus, and “despite the force of [her] arguments,” the court ruled against her as it does in 75 percent of cases with court-appointed amici curiae.

Click for vote alignment by ideology.
Posted by ichbinalj at 2:39 PM No comments: