Is Charleston burning? No!
Why not? Well, I submit it is because Christians in the South, both black and white, love each other and they love Jesus. They are wise enough to not react to outside agitators and not burn their own town. And, to a certain extent, Blacks in the South, still know their place.
But, there has been major progress in the South. Dr M L King said "the South will solve its race problem long before the North." In the South Blacks and white have lived next to each other forever, and most white babies were suckled by Black nurse maids. And Sunday morning is no longer the most segregated time of the week.
It is inspiring and encouraging to see the mutual respect that white and Black Christians show each other. The memorial service at Emmanuel AME was beautiful to watch. Black and white Christians singing and praying together.
God is love. His truth is ever lasting and His mercy endures forever. Bravo Charleston. You have shown the world that Love is stronger than hate; Black and white Christians can live together in peace.
People are praying for racial accord in a city that built its initial fortunes on slavery and has been shaped in part by racial tension and violence since its founding in 1670. 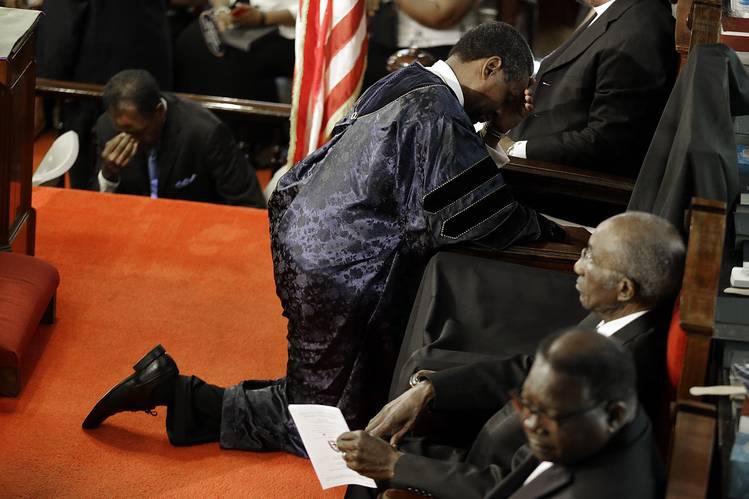 
(First, among the nine victims was The Rev. Clementa Pinckney, 41: A state senator and the senior pastor of Emanuel, he was married to Jennifer Benjamin and the father of two children, Eliana and Malana. He was a 1995 graduate of Allen University and got his master's degree at the University of South Carolina in 1999. He served in the state Legislature starting in 2000; The Post and Courier says black fabric was draped over Pinckney's Senate chamber seat on Thursday. I believe Senator Clementa Pinckney was the real target of the assassin. The other eight were collateral damage designed to coverup a political assassination.)
CHARLESTON, S.C.— Community leaders and parishioners across this historic city vowed on Sunday to build racial accord in the wake of last week’s killings of nine black members of an African-American church, allegedly by a white man. 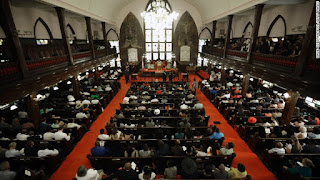 Hundreds filled the pews of the historic church in Charleston, South Carolina.
"The doors of the church are open," declared the Rev. Norvel Goff during prayers. "No evildoer, no demon in hell or on Earth can close the doors of God's church," he proclaimed.
They sang hymns, prayed and remembered the nine church members shot to death Wednesday night during Bible study.
One of the victims was the church's pastor, the Rev. Clementa Pinckney. His seat behind the podium was shrouded in black cloth and uniformed police officers were present in the side aisles. 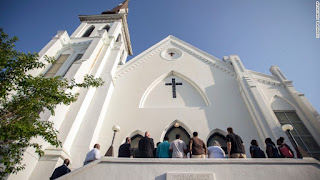 Overcoming evil with faith in God was a theme throughout the service.
"It's by faith that we are standing here and sitting here," Goff said. "It has been tough. It has been rough. Some of us have been downright angry. But through it all God has sustained us."
But as church bells rang and black and white parishioners prayed together at Emanuel African Methodist Episcopal Church, the site of the attack, and at other houses of worship, signs of how challenging that will be were apparent.
At Emanuel AME, a rapturous and racially diverse crowd packed the church, dancing, singing hymns and shaking tambourines to show that the killings could not shake the resolve or faith of one of the oldest black churches in the nation.
Churchgoers lined the walls and crowded the balcony in bow ties and three-piece suits. Hundreds of people stood in the streets, near speakers, to listen to the service. Numerous police officers guarded the proceedings, and teams of grief counselors were on hand.
“A lot of people expected us to do something strange and break out into a riot,” the Rev. Norvel Goff said from the pulpit. “Well, they just don’t know us. They don’t know us because we are a people of faith.” He praised the city for responding with love and compassion.
The minister also vowed to pursue justice for those slain. “We’re going to be vigilant, and we’re going to hold our elected officials responsible to do the right thing,” he said, calling for justice for “those who are still living in the margins of life.”
Charleston built its initial fortunes on slavery and has been shaped in part by racial tension and violence since its founding in 1670. The first shots of the Civil War were fired here, and much of its robust tourist industry plays to notions of a genteel antebellum South, a gentility that was propped up by the institution of slavery.
Over the past few decades the city has changed dramatically, with major companies relocating to the region and upscale shops and vogue restaurants dotting the downtown.
Large banners appeared on some buildings after the shootings, urging racial harmony. An interracial rally was planned for Sunday evening across the Arthur Ravenel Jr. Bridge, a dramatic span that dominates the city skyline.
Yet outer neighborhoods and nearby communities are impoverished, and many say racial tensions fueled by economic disparities and other issues linger beneath the surface. 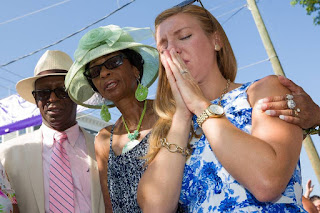 As congregants left the church, a large, mostly white crowd greeted them by singing the song “Amazing Grace,” a show of support that brought tears to many peoples’ eyes as they stepped into the hot South Carolina sun.
A little more than a mile away, about 150 parishioners, almost all of them white, gathered for Holy Communion at St. Michael’s Episcopal Church, one of the oldest parishes in the city. Both George Washington and Robert E. Lee once prayed at this ornate church, built in the 1700s, and Charles Pinckney, a signer of the Constitution and a prominent slave-owner, is buried in the adjacent graveyard.
Alfred T.K. Zadig Jr., the 47- year-old rector of St. Michael’s, said he was having dinner only a block away from Emanuel when the shooting took place Wednesday night, and the tragedy made him realize how little connection he had to the city’s black churches.
“I did not know one single person in that church,” said. Mr. Zadig, who has been St. Michael’s rector for eight years. The church now is committing itself to building a relationship with Charleston’s black churches, including contributing money to help Emanuel and inviting members of Emanuel to preach at St. Michael’s, the pastor said.
(By Cameron McWhirter, Josh Dawsey and Mara Gay)


The nine people who were killed in a mass shooting at Emanuel African Methodist Episcopal Church in Charleston, S.C., on Wednesday have been identified by the authorities.
The group of six women and three men had come together for a weekly Bible study meeting. The man who is suspected of killing them is now in police custody.
The Nine Victims are:
(1) The Rev. Clementa Pinckney, 41: A state senator and the senior pastor of Emanuel, he was married to Jennifer Benjamin and the father of two children, Eliana and Malana. He was a 1995 graduate of Allen University and got his master's degree at the University of South Carolina in 1999. He served in the state Legislature starting in 2000; The Post and Courier says black fabric was draped over Pinckney's Senate chamber seat on Thursday. I believe Senator Clementa Pinckney was the real target of the assassin. The other eight were collateral damage designed to coverup a political assassination.

In 1996, at 23, he was elected to the South Carolina House of Representatives, the youngest Black person ever to win such a seat.
Four years later, voters elevated him to the state Senate.
Pinckney became even more influential through his work as a legislator, pushing several causes -- like recently advocating for legislation to make police wear body cameras, believing it would protect lives, according to his cousin, state Sen. Kent Williams.
According to local media reports from the time, Rev Pinckney attended a vigil in North Charleston in the aftermath of the shooting of Walter Scott, an unarmed Black man by a white police officer.
Walter Scott’s fatal shooting by Officer Michael Slager was captured on camera by an eyewitness, and Rev Pinckney emphasized the significance of that video to the public’s perception of the case. Slager has been indicted for murder in the shooting and is awaiting trial.
Rev Pinckney led calls for mandatory police body cameras, and rallied the public to show their support.
"I think that if my colleagues will be moved by the fact that other people are moved by the need for body cameras, and also that there will be persons that will give testimony as to why body cameras are important,” he said.
“Body cameras help to record what happens. It may not be the golden ticket, the golden egg, the end-all-fix-all, but it helps to paint a picture of what happens during a police stop." 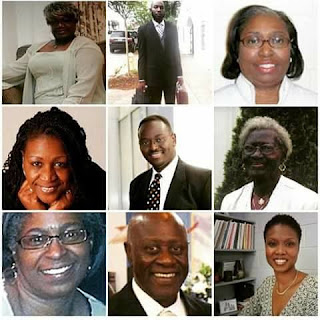