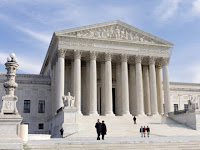 WHO SAID "YOU CANNOT TAKE IT WITH YOU"?
The Supreme Court heard the case of Astrue v. Capato on March 19th to determine if a child conceived after the death of one of its parents is entitled to benefits under the Social Security Act. About 100 such cases are pending before the Social Security Administration (SSA).
http://www.amazon.com/SocialNsecurity-ebook/dp/B006VOQIKK
Robert Capato, who knew he was dying of terminal illness, froze his sperm so that his wife, Karen, could have more children after he died. 18 months later, Karen gave birth to twins after having in vitro fertilization. Robert and Karen Capato’s twins were born in 2003 — 18 months after Robert Capato’s death. Karen Capato's application for survivor benefits on behalf of the twins was rejected by the Social Security Administration, which said that for them to qualify, Robert Capato needed to be alive during their conception. A federal judge agreed, saying they had to qualify as Capato's children before his death or qualify under state inheritance law as children who could legally inherit.

And in its first review of “posthumous conception,” the ­Supreme Court on 19 March struggled to align modern reproductive techniques to a federal law written in 1939.

The major issue that emerged in arguments in this case was the definition of a child and familial linkage according to the Social Security Act. There is no doubt to the court that this was his child, but according to the current law, it appears as if the child’s conception and birth after the death of the father would end the child entitlement to Social Security benefits.

Lawyers for Capato argued that children of a parent should be covered by the Social Security Act regardless their time of birth.

Lawyers for the Social Security administration, as well as a few of the justices, seemed to be concerned with the implications of this case if found in favor of Capato. For instance, if there were loose paperwork around sperm donation centers, it could lead to multiple cases of children seeking Social Security benefits who would otherwise not be entitled to any.

This U.S. Supreme Court case is the first case testing whether children conceived through in vitro fertilization after the death of a parent are eligible for Social Security survivors benefits.

The case began in 2001 when Robert Capato was diagnosed with esophageal cancer. Before beginning treatments, he deposited sperm at a fertility clinic, and after he died, his wife Karen carried out the couple's plan to conceive using Robert's sperm.

A federal appeals court in Philadelphia disagreed and Reversed the decision, saying the 1939 Social Security Act confers benefits on all biological offspring of a married couple.

The Supreme Court's eventual decision in the case will have an immediate effect beyond the Capato family. More than 100 similar cases are currently pending before the Social Security Administration.

The Justices wrestled with how to interpret a law written in 1939 and how to apply it to modern technology never imagined back then.

The government's lawyer, Eric Miller, contended that since 1940, the Social Security Administration determined a child's eligibility for survivors benefits based on whether that child can inherit under state law.

Justice Samuel Alito noted that the Congress that enacted this law in 1939 "never had an inkling about the situation that has arisen in this case ... just as they had no inkling that any state would go off and take away the [inheritance rights] of children born to married people."

Justice Elena Kagan called the government's reading of the law "bizarre" in view of the fact that another section of the statute does not apply state inheritance law to stepchildren, grandchildren and even step-grandchildren when determining survivors benefits.

But that was about all the sympathy the Capatos got. Justices Antonin Scalia and Anthony Kennedy both raised an issue not before the court — whether a child conceived in vitro can be properly called a survivor since the child never lived with or was dependent on the deceased.

And when the Capatos lawyer rose to make his argument, he got pounded.

Justice Sonia Sotomayor asked whether Capato's in vitro children would still qualify for survivors benefits if she had remarried. "A situation like that is what is making me uncomfortable because I don't see the words 'biological' in the statute" or the word "'marriage' ... within the definition of 'child,'" she said.

Rothfeld replied that when Congress enacted the Social Security Act in 1939, more than 95 percent of the children in the United States were the offspring of married parents, so when Congress said a child is a child, "it would have had in mind the paradigm of the time."

Justice Kagan asked whether Rothfeld could point to any other statutes around that time which supported the notion that when people said child, they meant child within a legal marriage.

Rothfeld said it was so clear back then that there was no need to define it further.

Justice Sotomayor asked if the child of an unmarried mother is excluded from automatic coverage.

Rothfeld responded that under the statute as written, "that's correct." After all, Rothfeld argued, in 1939 there was no way to be scientifically certain who the father of a child was. Marriage was a proxy for that.

But at the time this statute was written, "Wasn't it also understood that the marriage ends when a parent dies?" Justice Ruth Bader Ginsburg asked.

Justice Stephen Breyer added that if the court ruled in Capato's favor, "I don't see how you're going to save us from even worse problems." Breyer said that the in vitro laws in every state are a very complicated subject and wondered whether the father could "just write a note and say this is my child, even if it's conceived later ...."

Rothfeld replied that Robert Capato did in fact write such a note, but under state law, it wasn't enough.

Chief Justice John Roberts said that under the court's precedents, if a law is ambiguous, it defers to the agency's interpretation and the Capatos would lose. Is there any reason, he inquired, that we shouldn't conclude, "based on the last hour" of argument, that this law is at least ambiguous?

"It's a mess," added Justice Kagan.

Lawyer Rothfeld responded: "The problem is that we're dealing with new technologies that Congress ... wasn't anticipating."

It was a tough slog through the details of a law that was written at a time when, as Justice Samuel A. Alito Jr. said, “they never had any inkling about the situation that has arisen in this case.”

The Capatos married in 1999, and shortly thereafter he was diagnosed with esophageal cancer. Because they feared that his treatments might leave him sterile, Robert Capato began depositing sperm at a sperm bank in Florida.

He rallied at one point, and the couple had a naturally conceived son in 2001. But as his condition worsened, the Capatos began to talk about in vitro fertilization to give their son siblings. They signed a notarized statement that any children “born to us, who were conceived by the use of our embryos” shall in all aspects be their children and entitled to their property.

But the provision was not included in Robert Capato’s will at his death in March 2002.

An appeals court reversed that decision, saying that the twins only had to meet the definition in another part of the law, which defined an eligible child simply as “the child or legally adopted child of an individual.”

But other appeals courts have found just the opposite, that the state laws are the places to look for determination of eligibility.

Assistant Solicitor General Eric Miller acknowledged that the law was ambiguous, because it seemed to provide two different definitions of a “child.” But he said the Social Security Administration had made the reasonable ­decision to require that a person seeking survivor benefits “must show that he or she would have been able to inherit personal property” under applicable state laws.

Alito seemed most skeptical of the government’s position, saying that perhaps Congress in 1939 did not think there was need to define the meaning of child. “They knew what a child was,” he said.

Charles A. Rothfeld, representing Capato, said the law was clearly meant to cover “the biological child of married parents” and the twins fit that definition.

What about a child born into a marriage but not a biological child, asked Justice Sonia Sotomayor. She wondered what would be the outcome if Karen Capato remarried but used her deceased husband’s frozen sperm to conceive.

Justice Ruth Bader Ginsburg pressed Rothfeld on whether the marriage between the Capatos ended with his death.

Justice Antonin Scalia wondered how children could be “survivors” if they were not conceived before their father’s death.

Chief Justice John G. Roberts Jr. noted that the court’s precedents say that when a statute is ambiguous, the courts should defer to the federal agency.

“Is there any reason we shouldn’t conclude based on the last hour that it’s at least ambiguous?” Roberts asked.

“I think the problem is that we’re dealing with new technologies that Congress . . . wasn’t anticipating at the time,” Rothfeld replied.

Karen Capato's application for survivor benefits on behalf of the twins was rejected by the Social Security Administration, which said that for them to qualify, Robert Capato needed to be alive during their conception. One federal judge agreed, saying they had to qualify as Capato's children before his death or qualify under state inheritance law as children who could legally inherit.

It's worth noting that federal law caps the total amount of survivor benefits paid to any family. The Capato twins have three siblings, at least one of whom qualifies for benefits, so the issue there may be more about how the pot is divided than the size of the pot. (For example, if the father's benefit amount is $1500.00 per month, then the children would be eligible to draw a maximum of $1500 per month, for a total benefit of $3000 per month to the family, until the youngest child reaches 18 years. If one child is eligible, then that child draws $1500; but, if 3 children are eligible, then each child draws $500 per month for a total of $1500.)