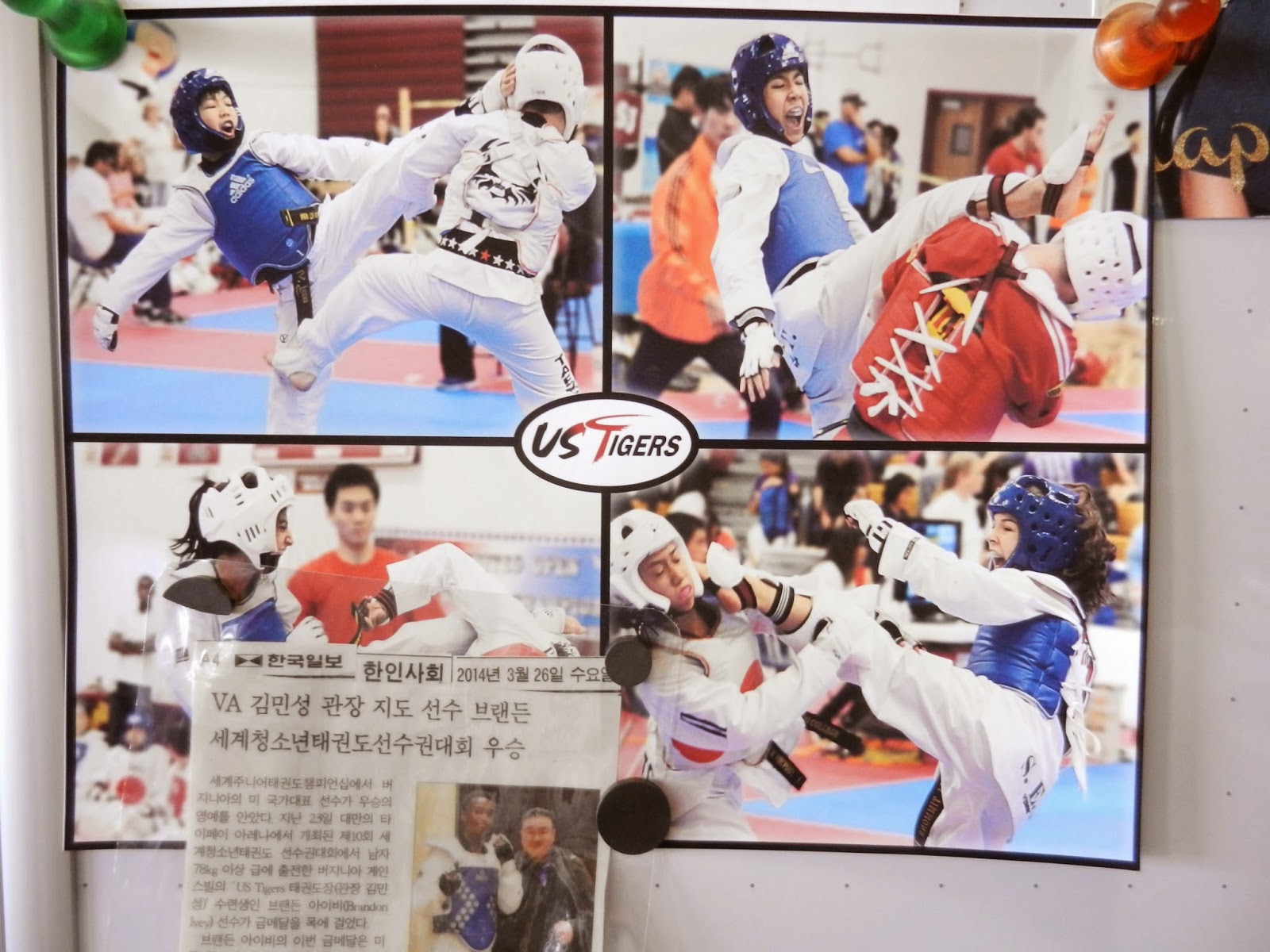 Champions are made, not born. It takes a family to produce a potential champion; and an old Chinese Proverb says that when the student is ready, the teacher will appear. When Brandon Ivey, Christian Yun, and Josh Liu and other champions from the USTigers Taekwondo School were ready, the master teacher appeared. That teacher is Master Dennis Kim from the USTigers World Taekwondo Federation School of Taekwondo, Haymarket, VA. Master Dennis is also an Olympic coach to the USA International Taekwondo Olympic Team. 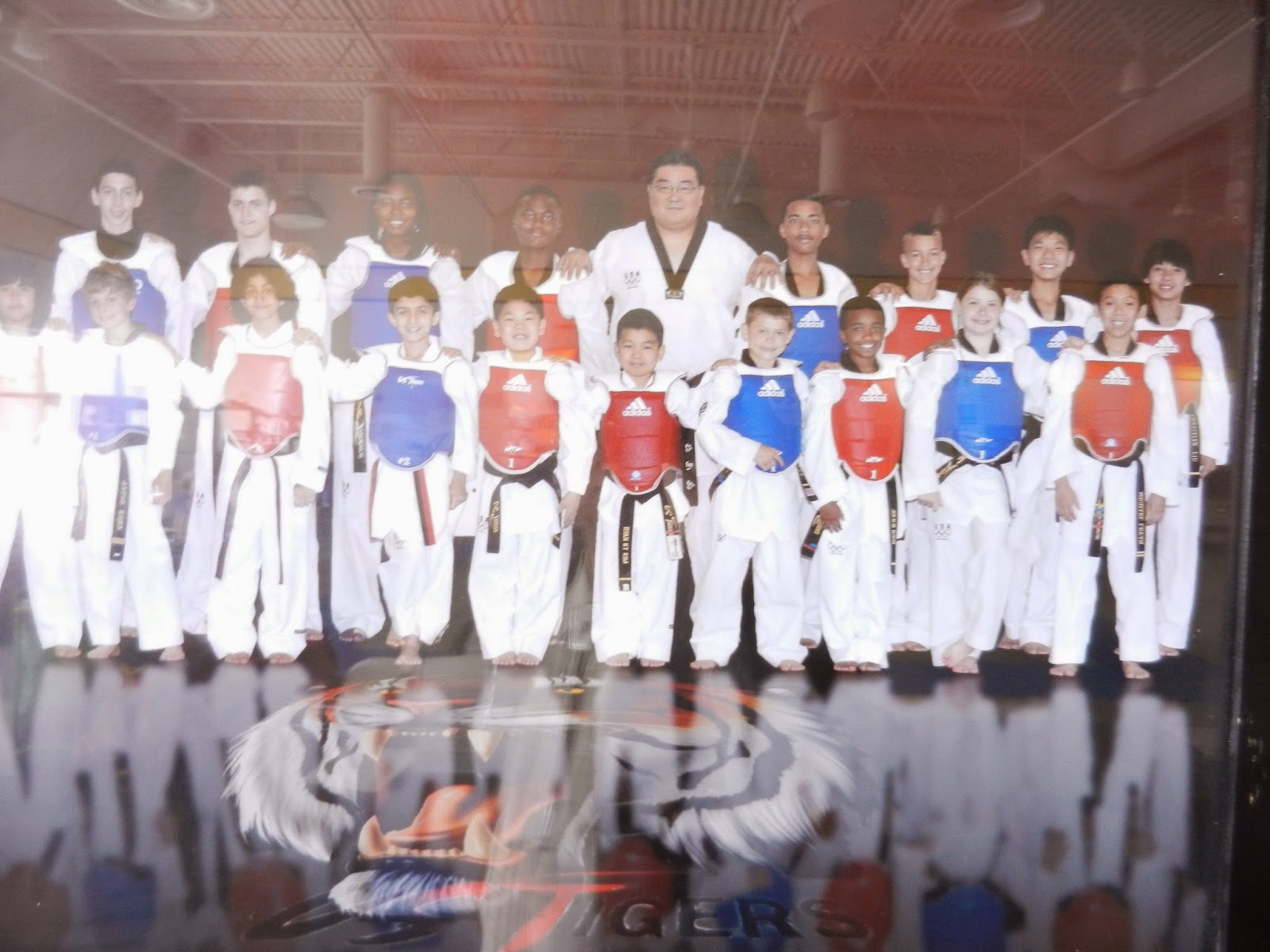 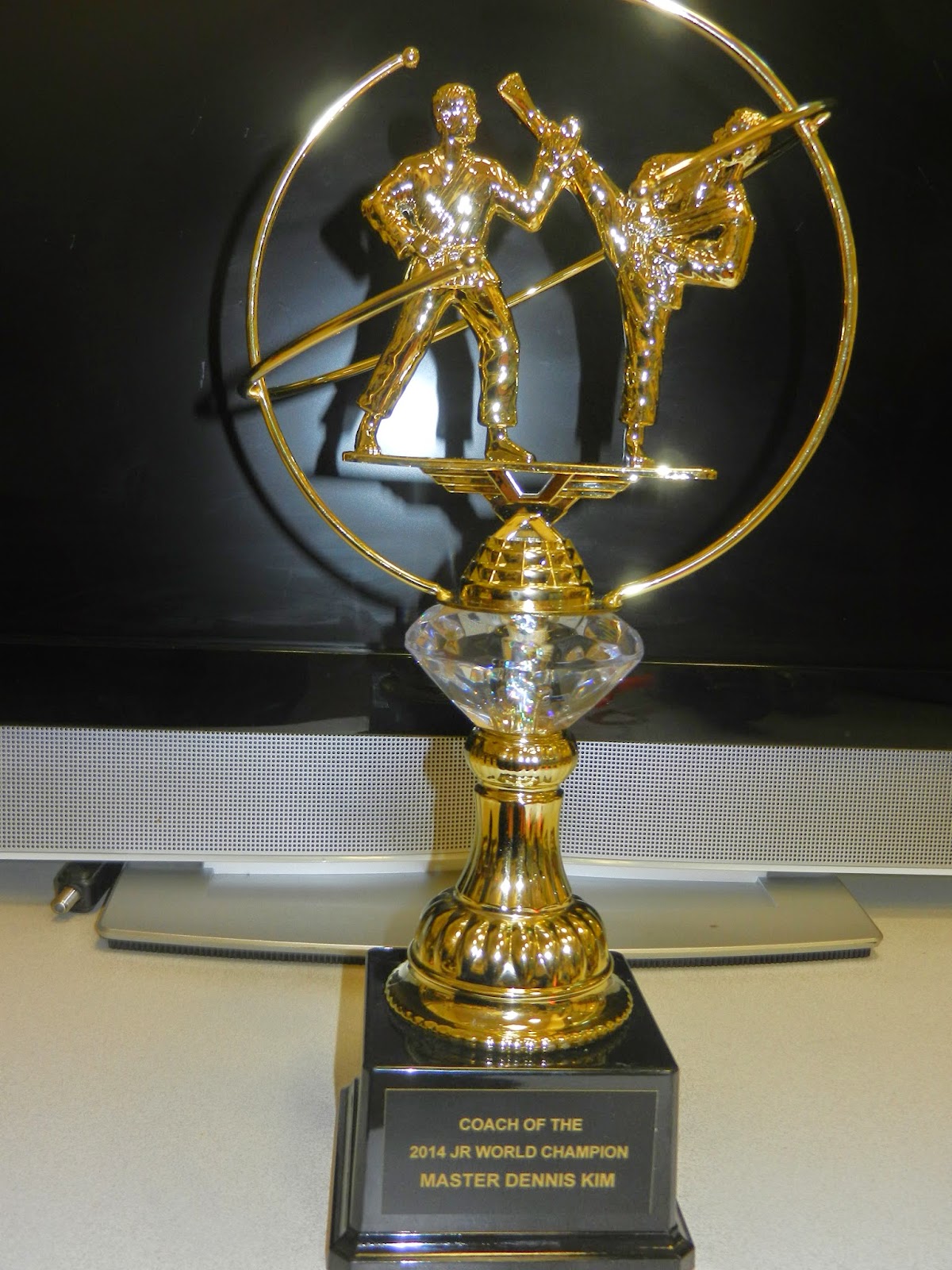 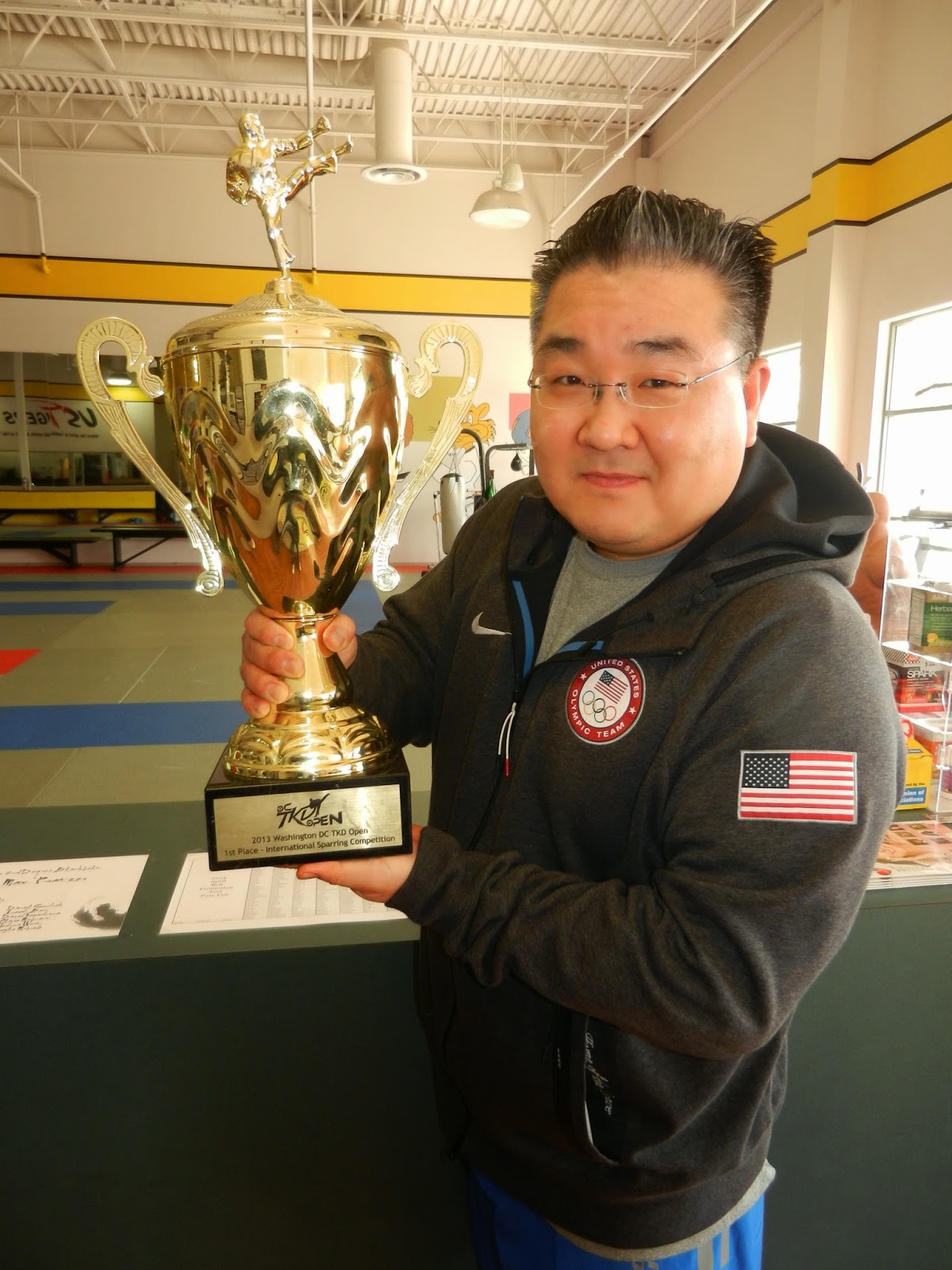 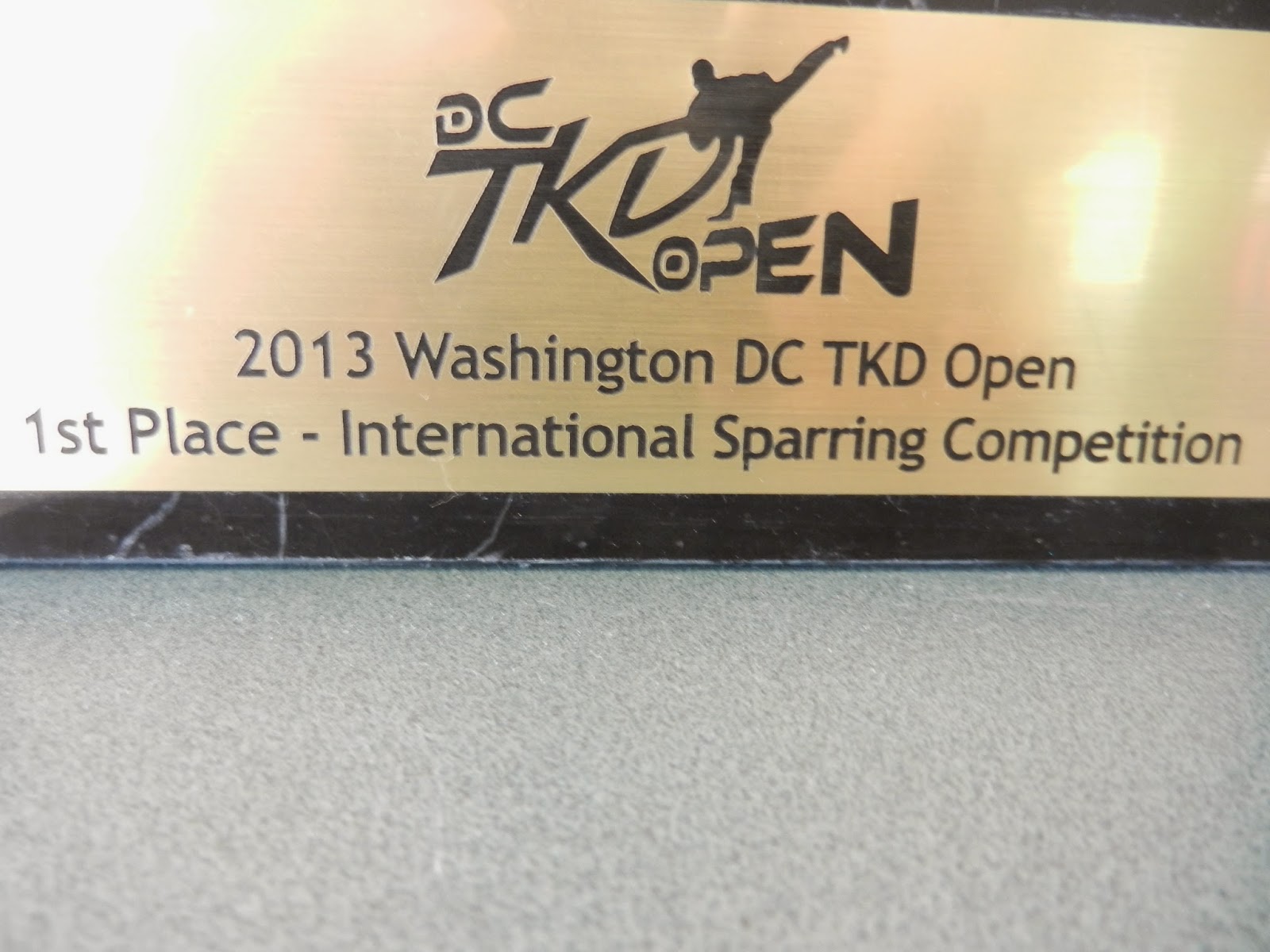 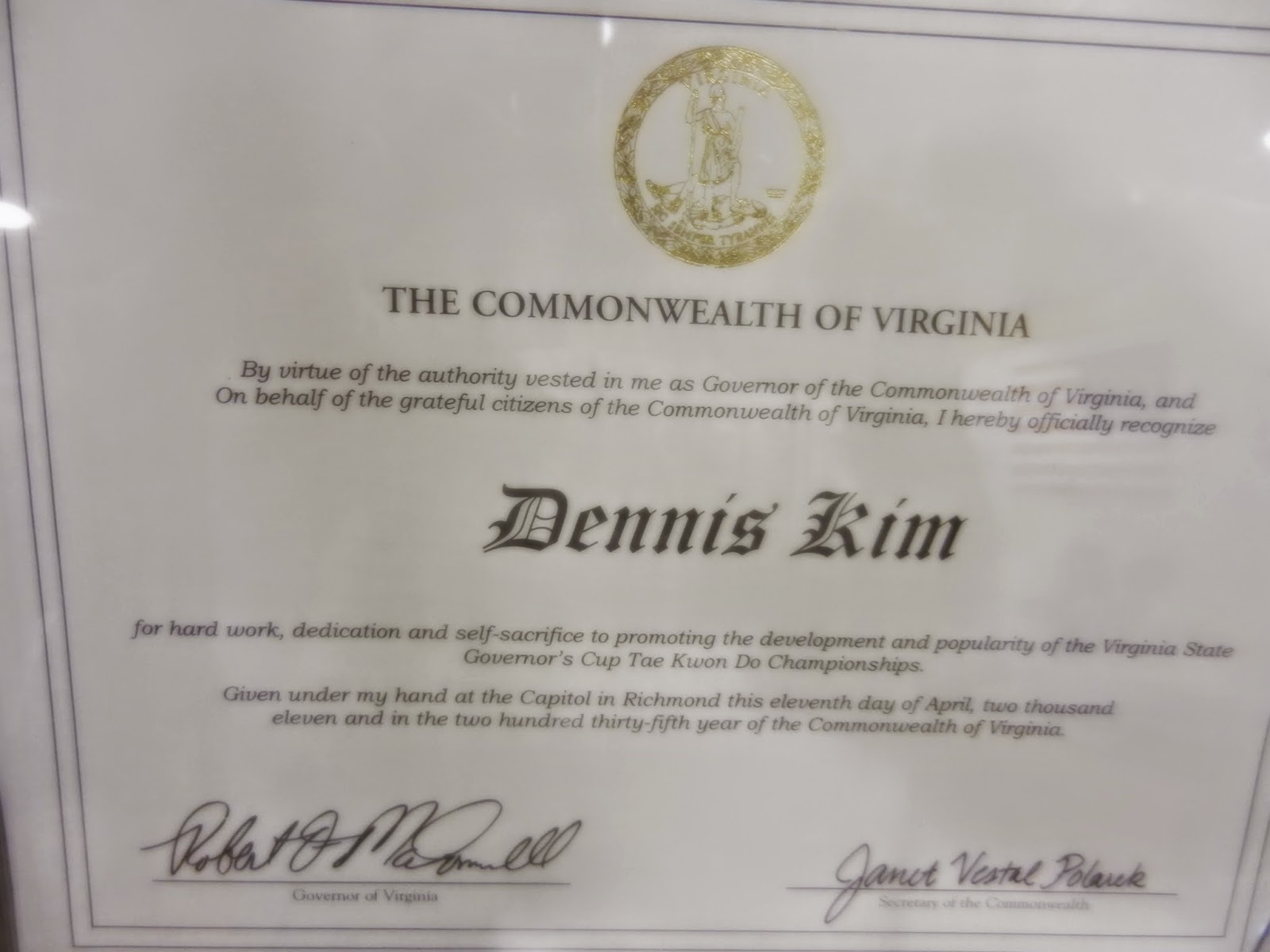 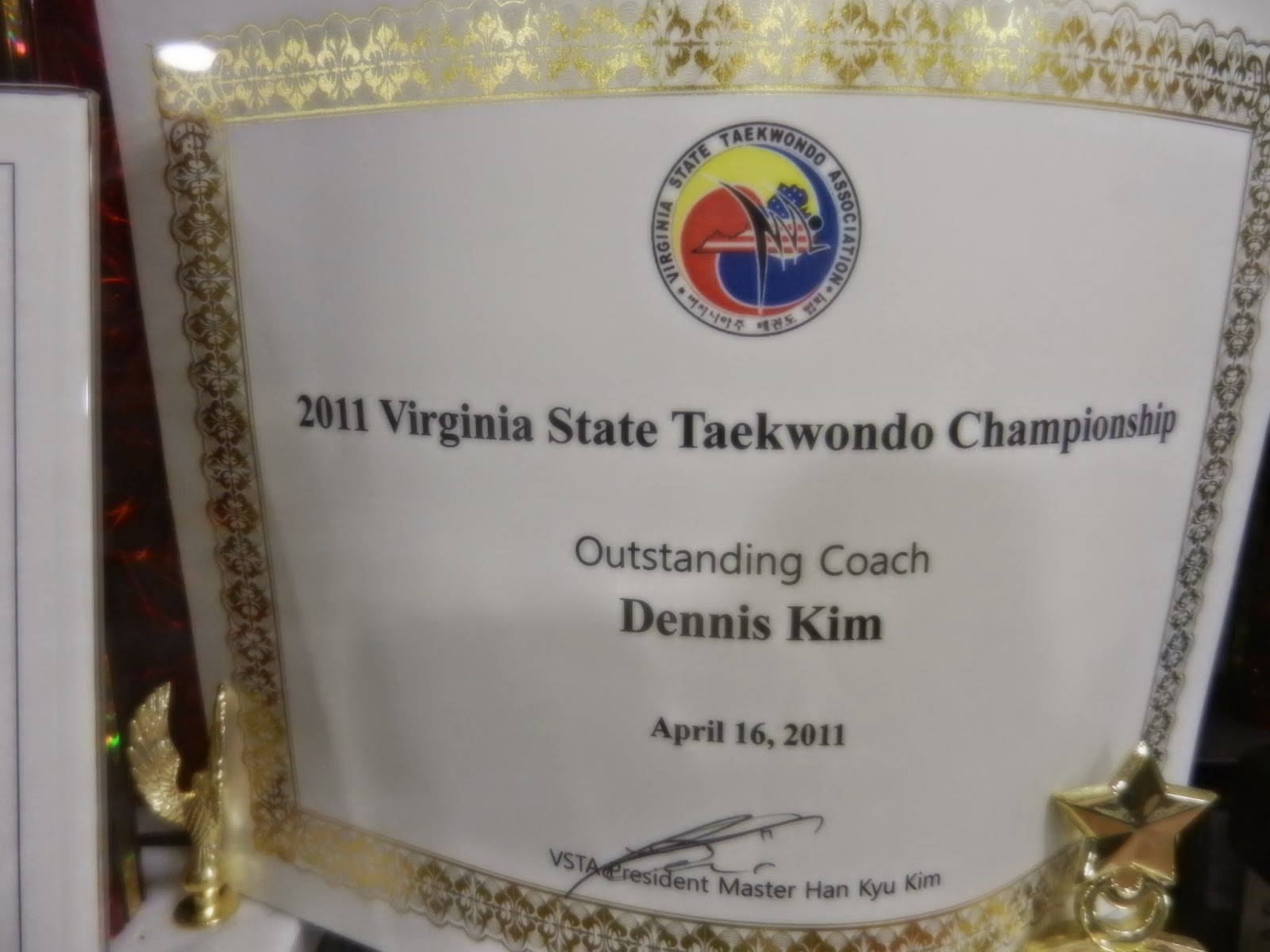 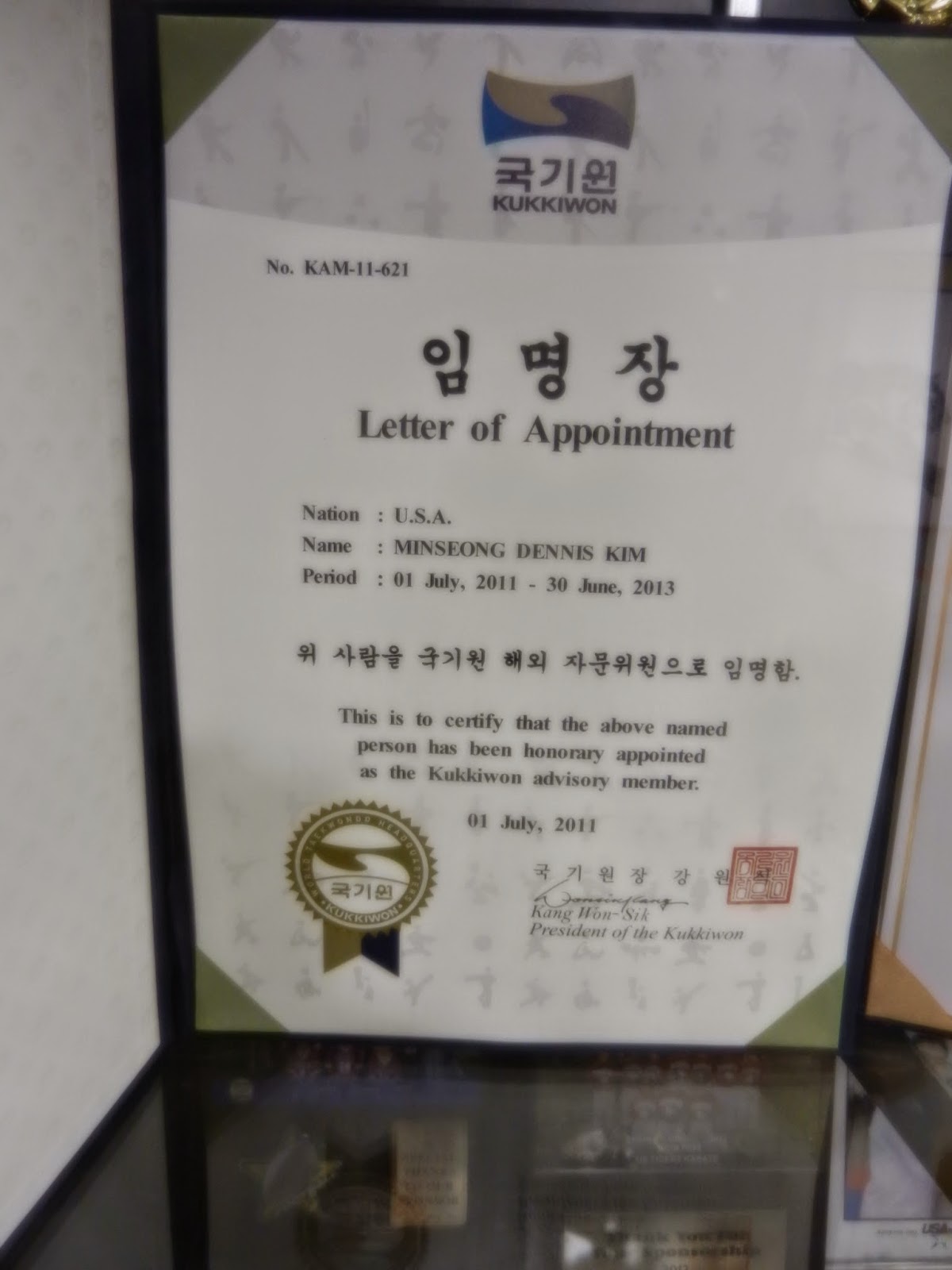 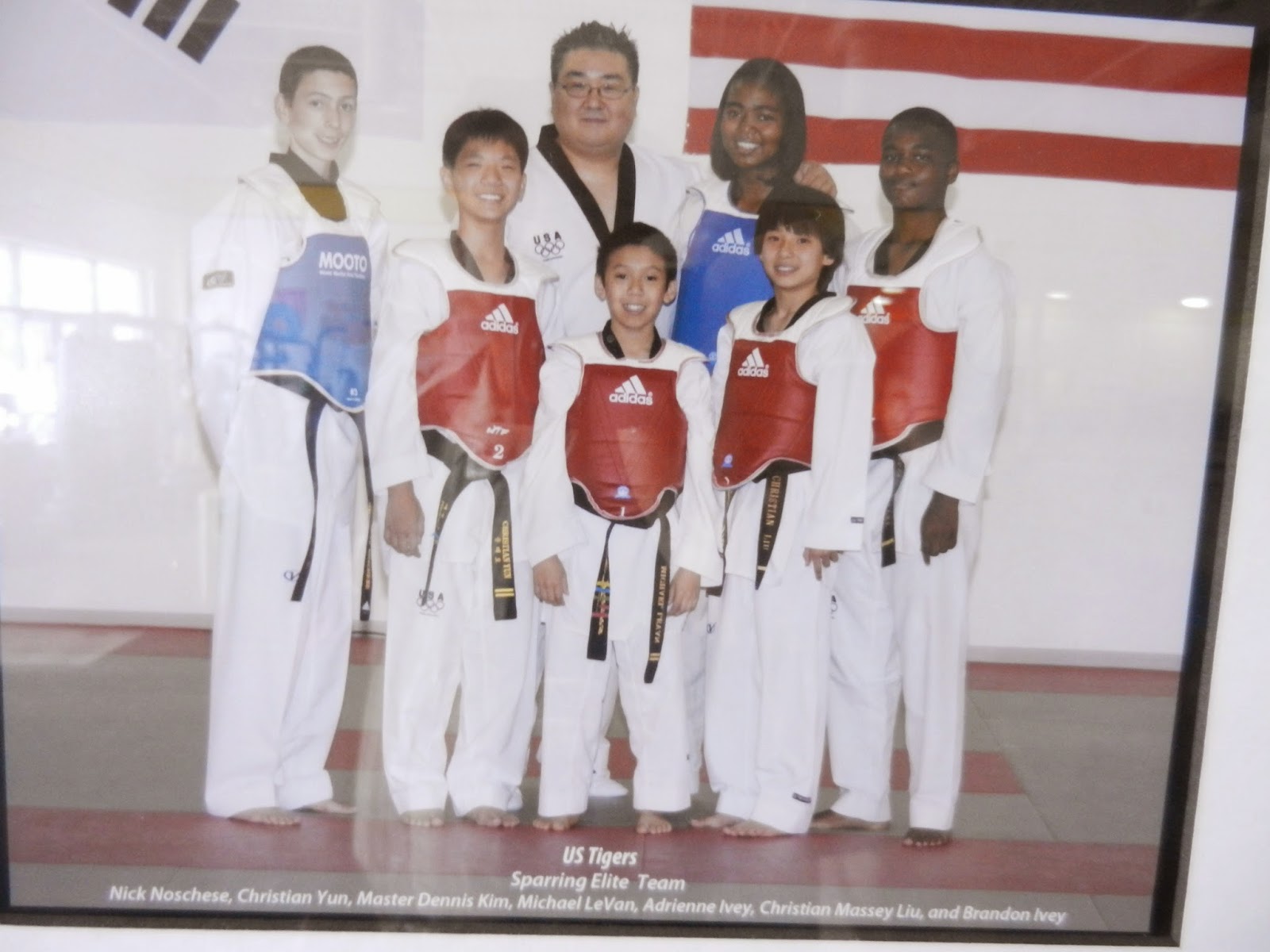 Josh Liu has been a member of the USA Taekwondo Cadet National Team multiple times. Most recently, he represented USA at teh Cadet World Taekwondo Championships in Baku, Azerbaijan in July, 2014.


On March 23, 2014 Brando Ivey represented the USA in the World WTF Taekwondo Championship Tournament in Taipei, Taiwan, Republic of China. He defeated FIVE heavy weight black belt fighters from various countries around the World. It was a single elimination tournament and Brandon went undefeated. 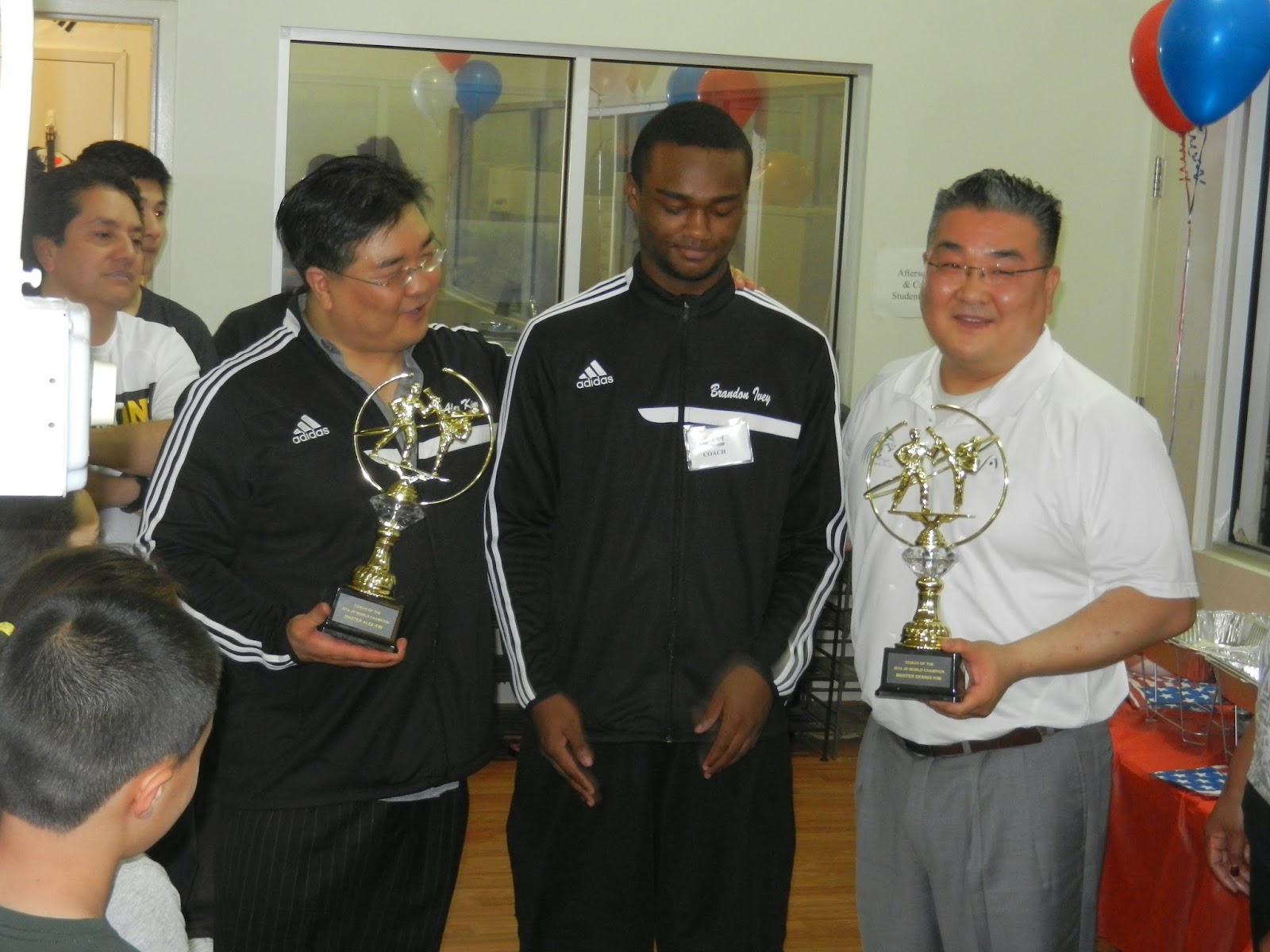 Brandon Ivey has studied the Taekwondo art since he was 7, learning "the way of the fist and the foot" and its tenets of discipline and respect from Master Dennis Kim.

"He wants to win so bad, he's willing to go that extra mile to make it happen," said Kim, owner of the US Tigers school and a coach for USA Taekwondo, the sport's governing body in this country. "His desire to win is greater than anyone else I've ever trained."
http://www.loudountimes.com/sports/article/the_path_to_the_top_ivey_brings_world_junior_taekwondo_championship_home
A Blogger commented that the USTigers' website doesn't do them justice. Current students of USTigers have the privilege of being steeped in raw potential: all instructors at USTigers are Kukkiwon-certified fourth-degree black belts or higher, and have competed at national or international levels in Taekwondo, either in Poomsae (forms) or competition sparring. Regular classes over the past four weeks have been taught by Masters Charlie and Kyle, both friendly and vibrant characters who clearly possess skill enough to teach even higher-degree black belts and an earnestness to teach that makes even the newest beginner feel welcome. USTigers also apparently has very close ties to Phoenix Taekwondo, another local dojang, and Phoenix's excellent instructors (namely Masters Won and Jeong) have visited to teach classes. Upon simple conversation with Master Dennis Kim, the proprietor of USTigers, it is clear that he is much more concerned with instilling the values and skills of Taekwondo in his students than he is with extracting their pocketbooks. The system of payment works much more similarly to a gym than to other dojang that the reviewer has visited: students pay once a month and are allowed to attend as often or as little as they like, with there being a class to attend nearly every day of the week. However, the belt-testing system occurs and is paid for separately, and not attending classes will probably have an effect on the length of time it takes to be allowed to escalate in belt level. Finally, USTigers has the gamut of competitive teams: a sparring team (the S.E.T or Sparring Elite Team), a Poomsae team, and a Demonstration team. Practices and qualification for these teams are both extremely rigorous, and has as a result produced several outstanding members. The S.E.T, especially, has seen a two-time United States Junior Olympic team member, as well as a Virginia State Champion in Taekwondo; Master Dennis is, himself, an assistant coach on the United States National Team for Taekwondo.
https://plus.google.com/110303337633094796208/about

As a 10-year-old, Christian Yun envisioned big plans for himself in the Taekwondo realm—he craved a spot on the U.S. Junior National Taekwondo Team. It was a five-year process, but Christian finally achieved that goal.
From the beginning, Christian has trained with Master Dennis Kim, owner of USTigers Taekwondo, for about 12 hours per week Tuesdays, Fridays and Saturdays. The student/coach relationship has lasted eight years and is ongoing.
Originally, Kim’s business was based in Ashburn. He later opened another location in Gainesville and operated both schools until 2010, when he handed over the Ashburn location, which is now called Phoenix Taekwondo. He now solely works out of the Gainesville location, which is still titled USTigers.
Christian’s sessions with Kim resemble those of CrossFit, a core strength and conditioning program. “My belief is that if you don’t have the body for it, you just won’t succeed, so we work on their body a lot,” Kim said, noting his students don’t spend the majority of their workouts kicking and punching, despite stereotypes.
The vigorous training has obviously been worth it, as Christian has competed on the regional, state and, of course, national level.
http://www.leesburgtoday.com/news/article_e18824b4-d1e9-11e1-a20d-0019bb2963f4.html?TNNoMobile 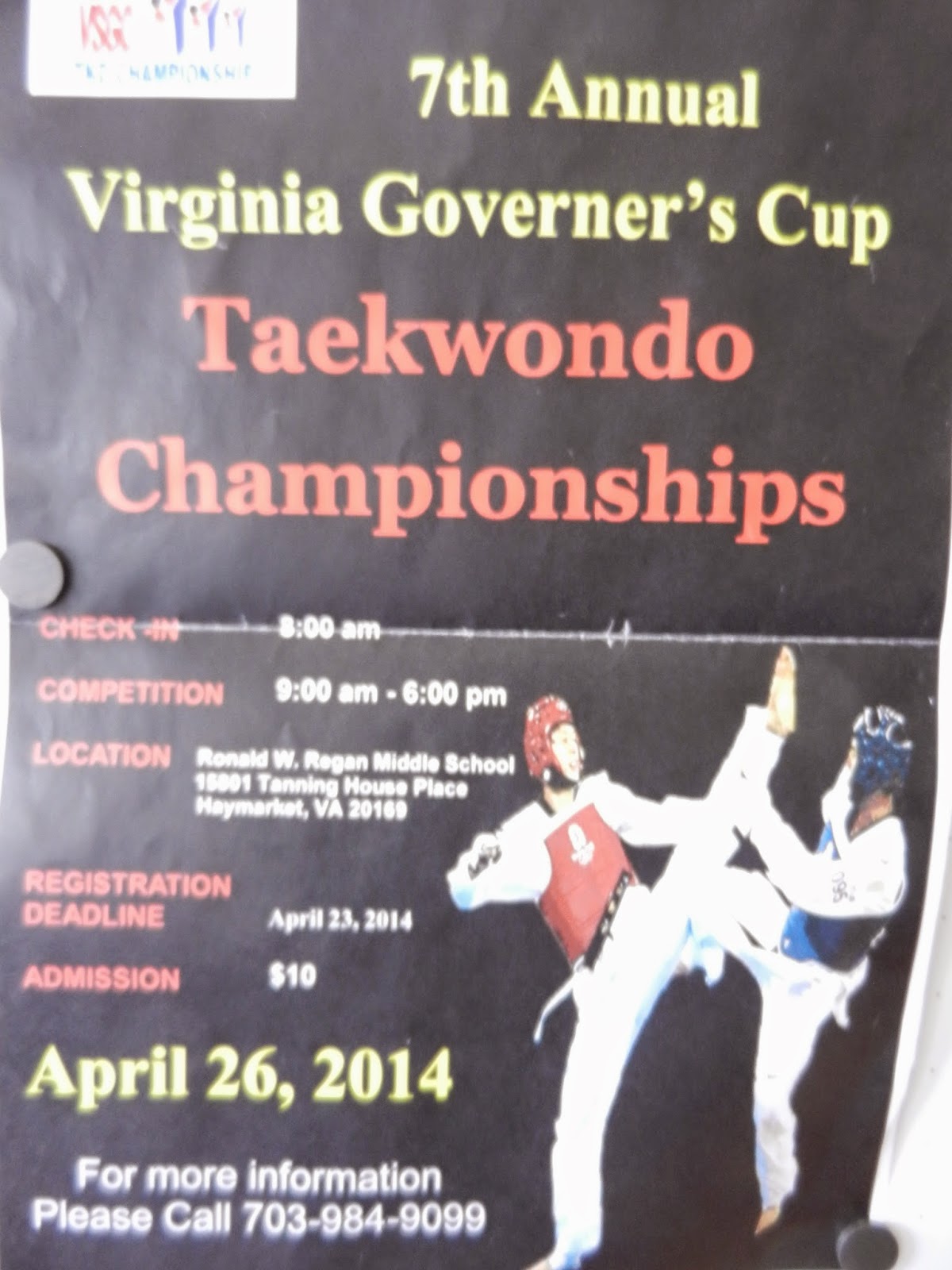 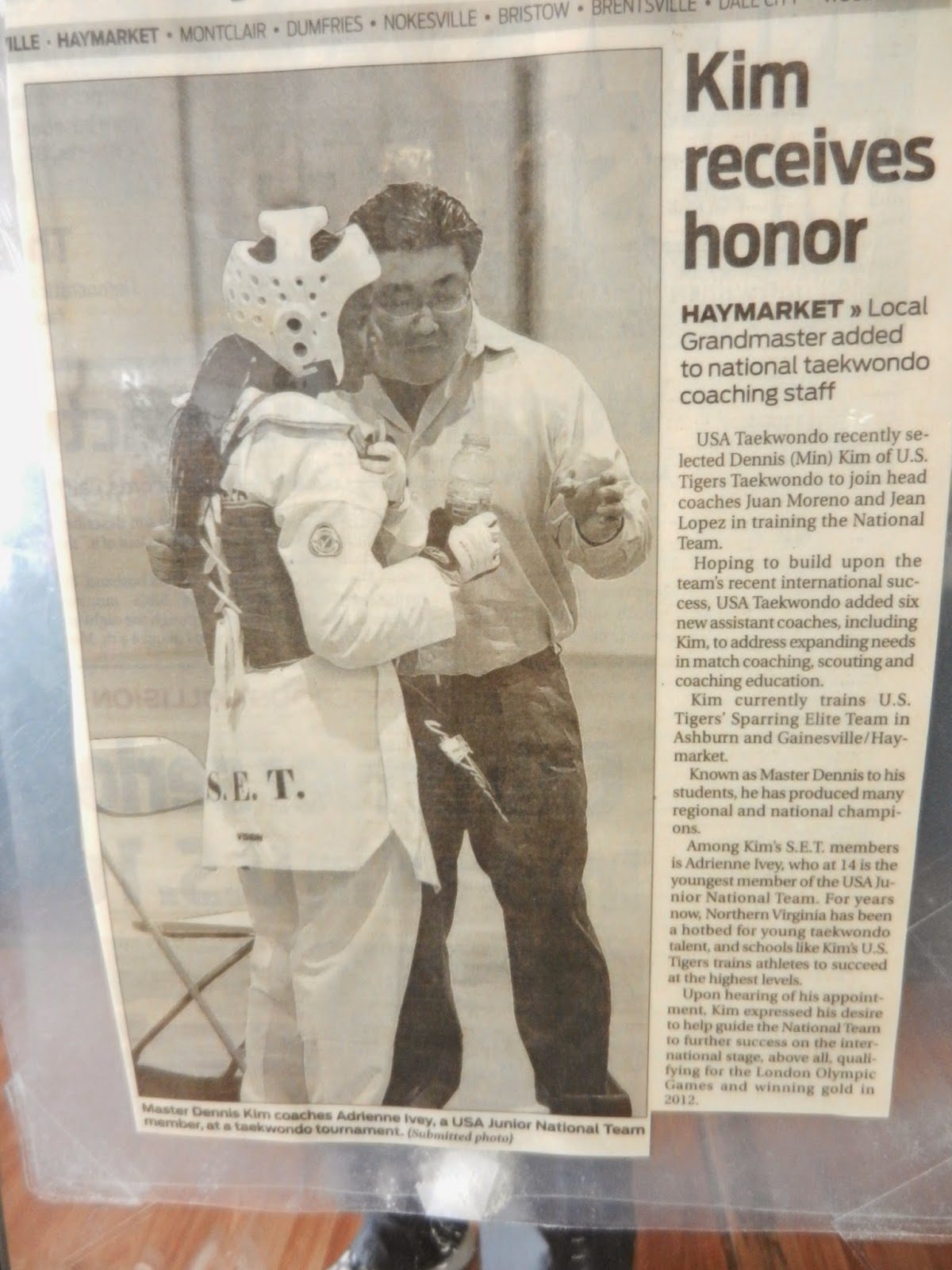 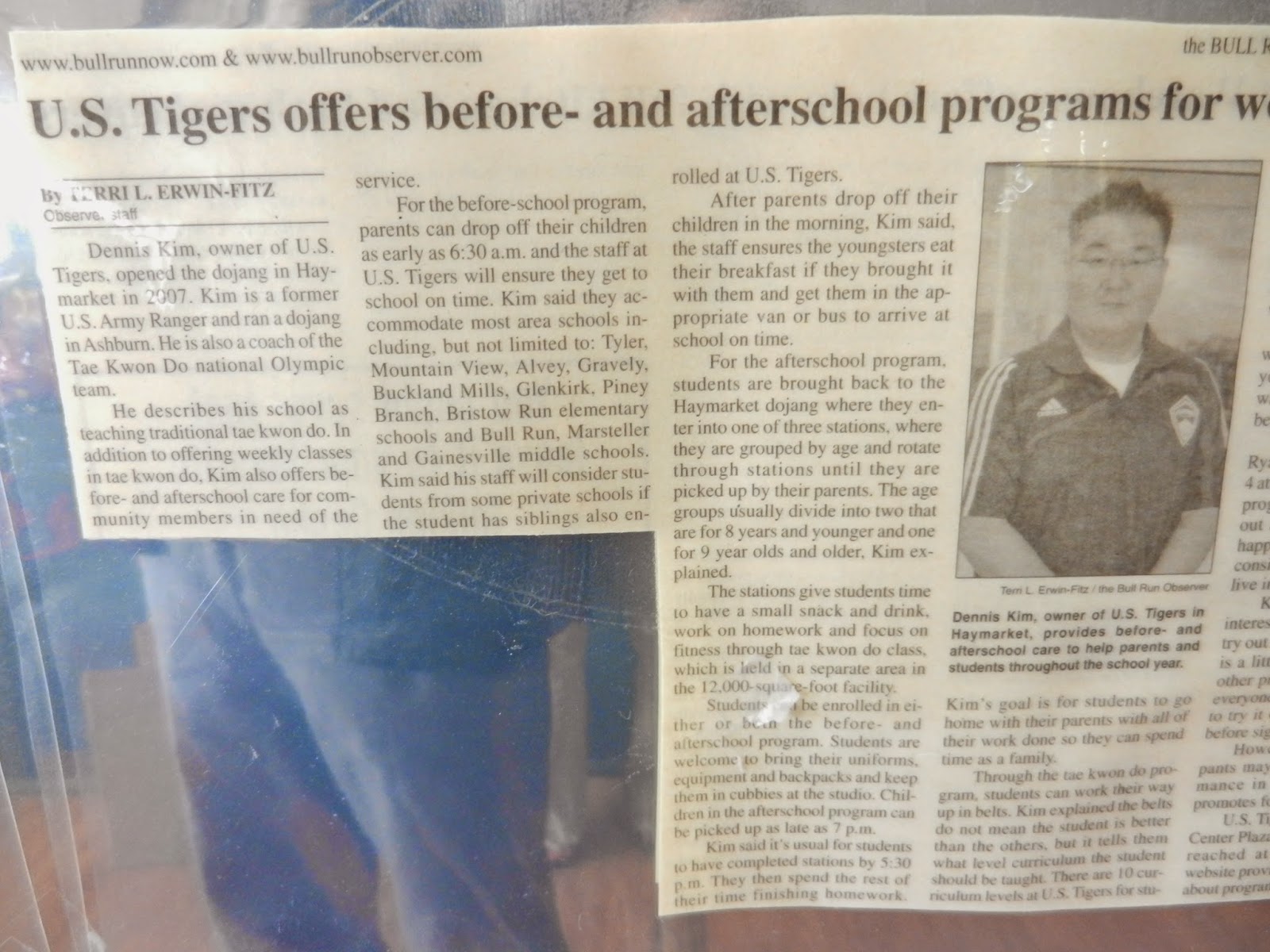