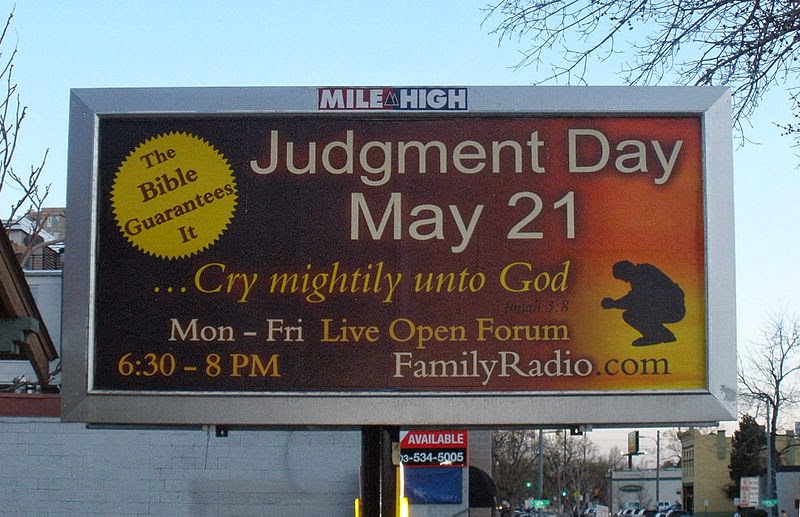 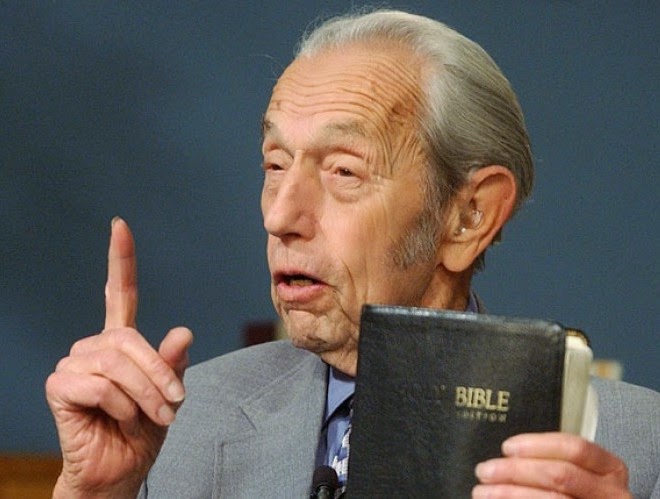 Harold Egbert Camping (07/19/1921 –12/15/2013) was an American Christian radio broadcaster, author and evangelist. Beginning in 1958, he served as president of Family Radio, a California-based radio station group that broadcasts to more than 150 markets in the United States.
Camping taught that all churches have become apostate and thus must be abandoned. He encourages personal Bible study and listening to his Family Radio broadcasts.
Camping is notable for issuing multiple failed predictions of dates for the End Times, which temporarily gained him a global following and millions of dollars of donations.
Camping predicted that Jesus Christ would return to Earth on May 21, 2011, whereupon the saved would be taken up to heaven in the rapture, and that there would follow five months of fire, brimstone and plagues on Earth, with millions of people dying each day, culminating on October 21, 2011, with the final destruction of the world. He had previously predicted that Judgment Day would occur on or about September 6, 1994.

Camping's teachings regarding the timing of Christ's second coming were based on the cycles of:
He projected these cycles into modern times and combined the results with other information in the Bible.
Camping's date for the crucifixion of Christ – Friday, April 1, AD 33 (Gregorian) – is nominally the same day as one of those supported by other twentieth-century commentators: Friday, April 3, AD 33 (Julian). However, the dates differ because Camping used the Gregorian calendar, while most commentators use the older Julian calendar, which had a two-day difference during the 1st century AD (they now differ by thirteen days).

In March 2012, Camping admitted that his predictions were in error, stating: "We humbly acknowledge we were wrong about the timing."
In March 2012, he stated that his attempt to predict a date was "sinful", and that his critics had been right in emphasizing the words of Matthew 24:36: "of that day and hour knoweth no man".

SEE Matt 24: 4--(Read)... and many will come in My Name, and will deceive many.
1) Rev Jim Jones carried hundreds of people from Oakland, CA to Jones Town in the jungle.
He spouted a lot of psyco-babble and caused a lot weak- minded Christians to drink the "kool-aid", and to committ suicide in the jungle.
2) Rev Sun Young Moon- came in the spirit and power of the SECOND COMING OF Jesus.
He led multi-denominational pilgrimages to the Holy Land.
He gained audiences to the PLO and many world wide Heads of States, as an International Peace-Maker.
He is the only man to enter into Commercial Trade Agreements with the Government of North Korea. And he built factories in North Korea creating jobs for many people.
He married 20,000 people at a time in numerous sports stadiums around America.
I drank his Red Gin-Sing Tea and attended his rallies.

Even as Bishop Starling was proclaiming him as the 2nd Coming of Jesus, Rev Moon died.
But, I can tell you He deceived many.

Matt 24: 6-- And you will hear of Wars and Rumors of Wars. COLD WARS and HOT WARS.
Just this week, Russia moved into Crimea and took it without firing a shot.
But about 50 Thousand Russian troops are standing on the border with the Ukraine, a country that borders Hungary where we lived before we came to Virginia.
The US and Russia are again involved in a Cold War.
The US has just ended two HOT wars in Iraq and in Afghanistan.
The UN reports that in the world today there are over 100 wars taking place, not just in Syria and Africa and the Middle East, but in places we cannot find on the map.

Are we living in the Last Days? The End of The World? The Time of the End? The End Times?
If we are, what are you going to do about it?
Is there work to be done?
What will it take to blast yo out of your comfort zone? To spur you to action? To save the world? One soul? You own soul?
Are you comfy? Satisfied?
Do you believe Christ is coming soon? Why?
If I can help somebody as I pass along. If I can cheer somebody with a word or a song?
If I can show somebody that he is traveling wrong, Then my living shall not be in vain?
Yes, Jesus, I want to do my duty as a Christian aught (to),
I want to bring salvation to a world once wrought,
I want to help spread the message that the Master taught,
So that my living will not be in vain.
Posted by ichbinalj at 4:17 AM