My Husband Is A Victim Of Flawed Civilian Command Policies

When the strains of war lead to infidelity

Rebecca Sinclair is married to Brig. Gen. Jeffrey Sinclair, a former deputy commander of the 82nd Airborne Division in Afghanistan, who is being tried at Fort Bragg, N.C., on charges including adultery and sexual misconduct. 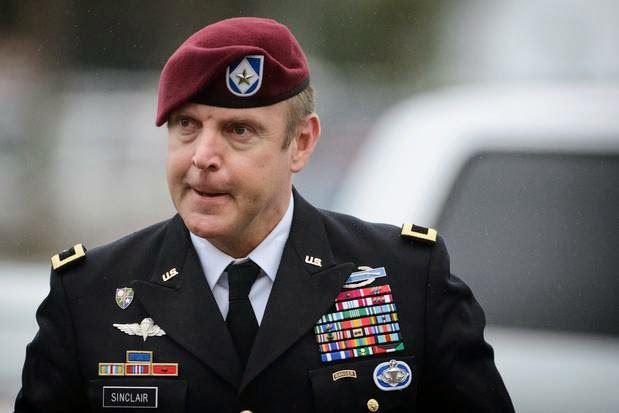 Like most Americans, I’ve been unable to escape the current news cycle regarding several high-ranking military generals entangled in sex scandals. Unlike most Americans, however, for me the topic is personal. My husband, Brig. Gen. Jeffrey Sinclair, is one of the officers.


Spectators will try to make this scandal about many things: the arrogance of powerful men; conniving mistresses; the silent epidemic of sexual assault in the armed services. But these explanations obscure an underlying problem: the devastating influence of an open-ended war — now in its 11th year — on the families of U.S. service members.
Gallery The David Petraeus scandal: Cast of characters: A scandal that began with the relationship between retired Gen. David Petraeus, the director of the CIA, and his biographer, Paula Broadwell, has mushroomed. Here’s a look at the people mentioned in the case.
Video

Ann Telnaes cartoon: Petreaus case reveals reach of nation’s surveillance programs.
Let me first address the elephant in the room. My husband had an affair. He violated our marriage
vows and hurt me tremendously. Jeff and I are working on our marriage, but that’s our business.


Jeff also needs to answer to the Army. That is his business, not mine, and he accepts that. I believe in and support him as much as ever.
I wish I could say that my husband was the only officer or soldier who has been unfaithful. Since 2001, the stress of war has led many service members to engage in tremendously self-destructive behavior. The officer corps is plagued by leaders abandoning their families and forging new beginnings with other men and women. And many wives know about their husbands’ infidelity but stay silent.
For military wives, the options are bad and worse. Stay with an unfaithful husband and keep your family intact; or lose your husband, your family and the financial security that comes with a military salary, pension, health care and housing. Because we move so often, spouses lose years of career advancement. Some of us spend every other year as single parents. We are vulnerable emotionally and financially. Many stay silent out of necessity, not natural passivity.
In many ways, ours is a typical military story. Jeff and I married 27 years ago. While he rose through the officer corps, I earned my bachelor’s and master’s degrees and taught at community colleges in the places where we were stationed. We later had children.
Since 2001, the wars in Iraq and Afghanistan have destabilized our life. We have moved six times in 11 years. On average, our kids change schools every two years. Between five deployments, site surveys and training operations, Jeff has spent more than six of the past 10 years away from his family.
None of this is meant to excuse infidelity. I expected more of Jeff, and I think he expected more of himself. But we’re fooling ourselves if we don’t recognize the larger reality. My friends who are married to other combat leaders have been my anchor during this crisis. We understand that our soldiers may come home disfigured or injured in such a way that we will become lifelong caregivers. We also understand that they may not come home at all, and if blessed with a reunion, they may carry emotional baggage few could understand. My friends know that it could have been their heartbreak as much as mine. This is the only time in U.S. history that our nation has fought a decade-long war with a volunteer Army. Doing so has consequences. Nothing good can come of families being chronically separated for a decade or more.
Jeff’s case has its own complications. He was involved with a woman who confessed to a superior officer. As a servicewoman, she stood to be charged with criminal conduct under the military code of justice. She alleged sexual assault, and no such allegation should ever go unanswered. We are confident that the charges will be dropped. Hundreds of text messages and journal entries came to light in pretrial hearings last week that establish the affair was consensual. The woman in question admitted under oath that she never intended to have Jeff charged, and Jeff has passed a polygraph test. Ironically, if Jeff had decided to leave his family he would be in the clear.
There are many accusations against Jeff, some of which have already fallen apart. Jeff has been charged with possessing alcohol in a combat zone; a visiting dignitary gave him a bottle of Scotch that remained unopened on a bookshelf.
His personal computer was used to access pornography; time stamps and Army records show that he was out of the country or city when most of the files were downloaded. We expect those charges, too, to be dismissed.
But the damage has been done. It will take years for Jeff to shed the false image of a hard-drinking, porn-dependent aggressor. The other generals will also struggle to rehabilitate reputations they spent decades building. All of these men are human beings, with strengths and fallibilities, and they have families who are under real strain. How we address this strain will say much about what kind of country we are; it will also determine how stable and strong our military is.
Posted by ichbinalj at 3:00 AM