The Good Samaritan Takes A Wife 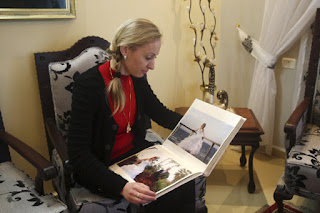 MOUNT GERIZIM, West Bank (AP) — The Samaritans, a rapidly dwindling sect dating to biblical times, have opened their insular community to brides imported from eastern Europe in a desperate quest to preserve their ancient culture.
Five young women from Russia and Ukraine have moved to this hilltop village in recent years to marry local men, breathing new life into the community that has been plagued by genetic diseases caused by generations of intermarriage.
Husni Cohen, a 69-year-old village elder, said the marriages are not ideal, since there is always a risk that the newcomers may decide to leave. But in a community whose population has fallen to roughly 360 people, he saw little choice.
"If this is the only solution to our problem, we must take this road. We Samaritans don't have enough women to marry, so I can't tell our young men not to marry and not to start a family," he said. He warned, however, that if the families don't adhere to the Samaritan religion and traditions, "then our future is in danger."
For Alla Evdokimova, so far, so good. She left Ukraine, married and joined the community two years ago. "I came here and found a big family," said Evdokimova, 26.

The Samaritans have lived in the Holy Land for thousands of years. They are probably best known for the parable of the Good Samaritan in the New Testament Book of Luke. Samaritans believe themselves to be the remnants of Israelites exiled by the Assyrians in 722 B.C. They practice a religion closely linked to Judaism and venerate a version of the Old Testament, but they are not Jews.
In the fourth and fifth centuries, the Samaritan population is thought to have topped 1.5 million, but religious persecution and economic hardship had nearly erased it by the early 20th century. Today, there are 750 Samaritans — split between communities in the Israeli city of Holon, near Tel Aviv, and near the West Bank city of Nablus on Mount Gerizim, the group's holiest place and site of its yearly Passover sacrifice. The Samaritans, who hold both Israeli and Palestinian residency rights, try to steer clear of politics.
Their numbers have been further reduced by the decision by 10 women in recent years to marry outside the community, resulting in excommunication. Today, males outnumber females roughly three to one.

With a limited pool of potential partners, it is common for Samaritans to marry within their extended families, even first cousins. As a result, Samaritan babies have suffered from birth defects and genetic diseases at a much higher rate than the general population.
Bringing in outsiders, along with advanced genetic testing in Israeli hospitals, have helped reduce what used to be a 15 percent rate of birth defects. Since 1996, only four of 97 Samaritan newborns have had disabilities, community members say.
Samaritans started marrying outside the sect about 40 years ago. In most cases, members of the Holon community found Jewish Israeli partners.
Only recently have the residents of Mount Gerizim looked to Europe. The Samaritans have used a mixture of old and new techniques, turning to matchmakers to find partners, also enlisting Internet services like Skype to get to know them ahead of time.
The women must make a huge commitment. They must accept the community's special dietary rules, such as eating meat slaughtered only by a Samaritan priest, and tough restrictions during their menstrual periods. For seven days, women cannot touch anything in the house, and if a mother comes into contact with her children, she must wash them before their father can touch them. After childbirth, a woman cannot have contact with her husband for 40 days if a boy is born, 80 days for a daughter. On Saturdays, the day of rest, women stay at home while men pray in their synagogues.
Alexandra Kraskuk, 28, was the first to come, making the journey from her native Ukraine 10 years ago. Her husband, Wadah, 50, found her through a Tel Aviv matchmaking service after being unable to find a Samaritan woman. He saw her picture, and then flew to Ukraine to meet her.
Krashuk, who has since changed her name to Shura Altif, said her parents objected to the age difference, but that she decided to take a chance and move to the West Bank. Today, the couple has a healthy 3-year-old son, Eliazar, who they also call Abdul Muin. Samaritans use Hebrew and Arabic names.
Making the transition was a challenge, she said. "There are good things and there are things that are not easy. It's a different life," she said. She said the monthly restrictions on women have been especially difficult. "But I commit to Samaritan traditions," she said. "This is the religion."

Before a prospective bride can join the community, the high priest must approve the marriage. The women must spend several months learning the ancient Torah, the Samaritan holy book which is somewhat different from the Jewish Torah, and other traditions before the ceremony.
In all, five women have arrived over the past decade, finding comfort with one another as their numbers have grown. They join each other on Christmas Eve and New Year's, which are not celebrated by the Samaritans. On sunny days, they travel to Israel together for barbecues.
Evdokimova, who now goes by the name Alaa Altif, is the most recent arrival. She and her 53-year-old husband, Azzam Altif, have a 2-year-old son, Murad. A former bartender in her native Ukraine who occasionally went to church, she said the dramatic change in lifestyle doesn't bother her. While the pair initially required a translator to communicate, Alaa has now learned enough Hebrew to speak directly to her husband. She is also learning Arabic, the language used by Samaritans to speak among themselves.
"The Samaritan holidays are festive, I love this. Saturdays were difficult in the beginning, but in the end, when all the family gathers, it's a nice thing," she said. Since arriving, she has arranged for a friend back home to marry another Samaritan relative of her husband. The wedding is planned for August.

Her husband said Alla's arrival has been a blessing. After failed attempts to find a wife in the Samaritan community, in 2010 he decided to turn to an Israeli matchmaking office, which showed him pictures of women in Ukraine. He traveled to Ukraine with a one-way plane ticket for his future bride, meeting 17 women in 20 days.
"I would take them out for lunch and a drink. I would take each one's address and tell her I'll call her if things work out. My wife was the fifth woman I met, but I set my mind on her, her personality and looks," he said.
Several days later, the couple married in a civil ceremony in Ukraine. Then they returned to the West Bank, where several months later they had a formal religious ceremony recognized by the community.
"Some people were happy. Others said it's hard," he explained. "But there is no other solution. It's either this or I stay a bachelor."

Posted by ichbinalj at 4:59 AM