Pope Benedict XVI
The prince of this world has claimed another victim. The moral titan of the Western World throws in the towel. Homosexual “marriage,” contraception, sexual promiscuity, euthanasia, pornography, abortion and moral relativism proved too daunting a challenge for the aging pontiff.
The resignation of Pope Benedict XVI has sent shock waves throughout the USA and Catholic world. He has fought a ceaseless war against sin and moral relativism. He has kept the faith, but he did not finish the course. There is much work to be done. The Holy Father’s eight-year reign was very successful. With his announcement that he will be stepping down at the end of February, the church must find a suitable successor. It will be difficult.

PopeMobile Passes White House
Pope Benedict’s greatest accomplishment is that he put in place an impregnable defense of the culture of life — continuing the mission of his charismatic predecessor, Pope John Paul II. Pope Benedict is more than a gifted manager. He is a brilliant scholar and theologian. He has bravely spoken out against abortion, homosexual “marriage,” contraception, sexual promiscuity, euthanasia, pornography and moral relativism. His worldview can be distilled to one seminal idea: Secular liberalism is a false god and pseudo-religion; the only source of transcendental meaning is the church and Jesus Christ.

Obama Meets Benedict XVI
Many people and politicians see the role of the pope as simply a spiritual father who puts out documents now and then, and can be counted on for a blessing and a photo op with the occasional baby. 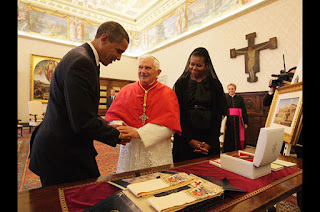 Hence, liberals despise him. They are now dancing on his papal grave. Since he ascended to the papacy, the anti-Catholic left has accused him of numerous crimes — being a Nazi sympathizer, fostering the hatred of women and perpetuating “homophobia” and “Islamophobia.” The now-deceased Christopher Hitchens referred to Pope Benedict’s career as having “the stench of evil.” (This from a man who, for years, rationalized communist tyrannies responsible for the slaughter of millions.)

Pope With NASA Astronauts Altman and Massimono
In the eyes of the secular left, the Holy Father’s real crime is he is a genuine Catholic. The pope’s teachings simply reinforced traditional orthodoxy, expressing the tenets of natural law. His views went against trendy progressive opinion. They amounted to restating basic, historic Catholic doctrine, such as homosexual behavior — sodomy — is immoral and unnatural; the family is the central unit of society; marriage consists of one man and one woman; contraception violates the fundamental purpose of sex, which is procreation; human life is sacrosanct from conception until natural death; and that male and female natures are distinct and different. He has consistently excoriated totalitarianism — both communism and fascism. In short, he opposes the culture of death in all of its malignant forms. No wonder liberals hate him.

Pope At WTC Ground Zero New York
Early in his papacy, he criticized radical Islam. Pope Benedict cited a 14th-century Byzantine emperor, pointing out that since its inception, Islam has had periods of violent expansion. For this, enraged protesters took to the streets in cities across the Muslim world, many of them calling for the pope to be killed. The Holy See has repeatedly championed the rights of Christians, especially in Muslim lands. Throughout the Middle East and Asia, Christians are the victims of persecution and pogroms. Yet, as Western leaders remain largely silent about this mass religious expulsion, the pope continues to raise his voice.

Pope AT UN
The topic he returns to repeatedly is the long-term threat posed by moral relativism to the West. It is fostering moral paralysis, hedonism and cultural decline. Ethical standards have been smashed. The doctrine of personal liberation is rampant. In America, the results have been disastrous: the breakdown of the family, skyrocketing divorce rates, a huge rise in illegitimate births, drugs, pornography, the mass murder of nearly 50 million unborn children and an AIDS epidemic that has led to millions of deaths. Recently, the Centers for Disease Control and Prevention released a report stating there are 20 million new cases of sexually transmitted infections each year. The most common diseases are gonorrhea, syphilis, herpes, hepatitis B and HIV. The CDC says the United States faces an “epidemic” of sexually transmitted diseases. We have become Sodom and Gomorrah.

Pope IN Israel
Like John Paul II, Pope Benedict continued to reach out to the Jewish community. Moreover, he began to finally confront and crack down on the sex-abuse scandal that has plagued the church. He apologized to the victims. He stripped pedophile priests of their positions, and started the long, difficult process of healing.

Pope In Africa
For decades, moral relativism — the belief there are no moral absolutes, no enduring principles of right and wrong — has been used as a battering ram to destroy the West’s Christian foundations. In particular, it forms the essence of our postmodern society’s fashionable bigotry: Christophobia. The hatred of Christianity lies at the core of the socialist project. In Europe, Christianity is dying. It is widely viewed as a superstitious institution that existed prior to the Enlightenment. Yet, the extinction of a religion inevitably leads to the destruction of the culture and the civilization it spawned.
The most recent popes have been preparing the Church for leadership in a world the likes of which has not existed in human history. John Paul II was young and had the energy to visit more than 100 countries, taking the leadership of the Church outside the Vatican walls to the world. He was known to almost everyone.
Benedict was 78 when he was elected pope, at a time when he was planning to retire and live quietly in Bavaria with his brother. He made clear from the beginning that he would not keep the same schedule that had helped define his predecessor.
The world has changed significantly, and the Church needs leaders who are more agile, supported by the natural endowments of relative youth. In the past, it might have made sense to nominate an older person who had a wealth of experience. Now, we need leaders who have experience and the ability to engage in a world that changes minute by minute.

Pope Benedict understood this. This is why he has been the West’s spiritual titan. His resignation opens up a moral vacuum. God willing, his successor will be able to fill his giant shoes.
Posted by ichbinalj at 7:23 PM