A Dictionary that Could Save The Tahitian Language From Extinction. 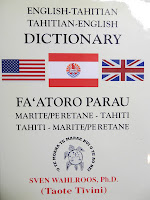 I was delighted to receive a review copy of Taote Tivini's Tahitian-English Dictionary in 2003 from the University of HawaI'i Press. I spent months using it and discussing it with my friend, the author, Dr. Wahlroos. I found it to be an abs olutely rare gem. Having tested it on all points that I considered relevant, I awarded it 5 out of 5 stars. I am not a linguist, but I am conversant in French, German, and a bit of Tagalog. I noticed a similarity in the way German and Tahitian words are formed. To understand the meaning of a Tahitian word, one must amalgamate the meaning of the words in the English definition. As an example; "mauruu ru" is commonly understood to mean "thank you". However, it is in fact an amalgam of the English words satisfied, pleased, content, and grateful. You will become more comfortable with the Tahitian language when you accept that there are no exact word-to-word translations. There are instead approximations of ideas. The function of a word in English may not be the same as the function of that word in Tahitian. For that reason Dr Wahlroos does not always label the words as nouns, verbs, or adjectives. Dr Wahlroos and I had many discussions on the subject of Tahitian proper names. We have both been given one. He is Taote Tivini, and I am Tamatoa. 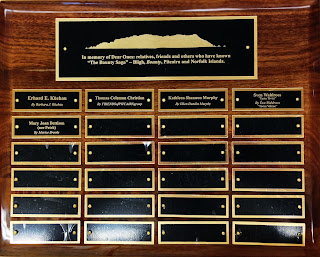 This dictionary does not contain a separate appendix of proper names. Dr Wahlroos determined that listing Tahitian proper names would be better accomplished in a linguistic journal where the tentative translations could be debated by other linguists. He concluded this after consulting with other distinguished writers of the Mutiny on the Bounty story, such as Ralph Gardner White. The translations of proper names are quite controversial. As an example: Most Bounty writers translate "Pomare" as "coughs in the night". Yet Captain Bligh, wrote that his Mate (ex Teina ex Tu) told him that he had changed his name to Pomare because his daughter had died of a disease by that name. Many of the names have debatable origins. "Ronetona" is London in Tahitian, and "Tivini" is the Tahitian way of pronouncing Steven. This dictionary was 37 years in the writing and it is a magnum opus. Every linguist and traveler should have one. I heartily recommend it without any reservation. https://www.amazon.com/gp/pdp/profile/A3U98UNR98U106?ie=UTF8&responseCode=ups&responseType=info
Posted by ichbinalj at 10:42 AM