Who Was The Real Sexual Predator In The USCGA Class of 2006?

Who Was The Real Sexual Predator In The USCGA Class of 2006? Was it Webster Smith or Shelly Roddenbush? Who fraternized with enlisted members? Who had consensual sex with an enlisted member from another branch of the military and later lied about it? Whose conduct was more to the prejudice of good order and discipline? http://www.amazon.com/CONDUCT-UNBECOMING-Officer-Lady-Conviction/dp/1460978021 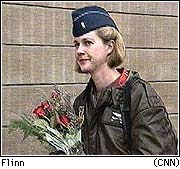 1st Lieutenant Kelly Flinn faced a court-martial on May 20, 1997 for military charges of adultery with a civilian soccer coach at Minot Air Force Base who was married to a female enlisted subordinate; conduct unbecoming an officer; disobeying a lawful order (in writing, to stay away from the married man), and for making a false official statement. She attended the Air Force Academy and bomber training, becoming the first woman B-52 pilot in the USAF. Flinn's case, due to her high visibility in Air Force recruitment advertisements, as well as the number of her accomplishments during her four years of active-duty service, drew national attention, eventually creating a media circus culminating when the Chief of Staff of the Air Force General Ronald Fogleman made comments on her case at a congressional hearing. Following General Fogleman's comments, Lieutenant Flinn was allowed to resign from the Air Force by Secretary of the Air Force Dr. Sheila E. Widnall with a general discharge instead of facing a court-martial. 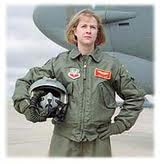 Flinn was the first female B-52 pilot in the USAF.Flinn was discharged from the U.S. Air Force in 1997 after being charged with making a false statement, adultery, and disobeying orders. Flinn's trouble with the Air Force received widespread media attention at the time and was discussed in a U.S. Senate hearing on May 22, 1997.

She later wrote a book recounting her experiences entitled Proud to Be: My Life, The Air Force, The Controversy. It has always been a consistent policy of the Air Force to prohibit and discourage relationships between officers and enlisted. While the media insists that she is being "unfairly singled out for adultery" (which is also prohibited under the UCMJ) in fact, what Lt. Flinn is charged with is disobeying a direct and legal order, and lying. It just happens that what she was lying about was her adultery. She admits guilt to both charges. She was deposed by a properly convened investigative authority and raising her hand, she swore to "facts" which later proved to be knowingly untrue. She got caught (metaphorically and actually) with her pants down. When an officer is involved in a social relationship (sexual or not) with enlisted people, the Air Force (and all the other services ) always considers a breech of discipline and a potential compromise of authority to be highly likely. Lt. Flinn was well educated in this philosophy during her four years at the Air Force Academy. In spite of this, she chose to have sexual relations with an enlisted man stationed at Minot. Then, during the same year, she chose to have an extended sexual relationship with a civilian who was married to an enlisted female stationed at Minot. When ordered to stop living with the married man, she chose to defy that order and continue. Finally, questioned under oath, she lied about the fact that she had continued to see the man she was ordered to stay away from. If the gender roles were reversed, she (he) would have been court marshaled, punished and discharged (just as scores of men in all the services have) without so much as a blurb in the local Minot newspaper. Media pundits expressed pious outrage at the Army drill sergeant affair where senior enlisted men had taken advantage of their authority and had relations with junior recruits. The Air Force considers Lt. Flinn (similarly) to be an officer who potentially and perhaps actually misused her authority. An acknowledged liar and person of low moral turpitude, she disobeyed orders and misled a properly authorized investigative officer. She lied under oath--a military felony---and incidentally, she admittedly engaged in prohibited fraternization which wreaks havoc to good order and discipline in a military unit. Now, as the Black army drill sergeant recently convicted for his misdeeds cried "discrimination," so does Lt. Flinn. That powerful defense always evokes the sympathy of the media, but clearly in her case, it is particularly disingenuous. In the eyes of the Air Force, Lt. Flinn is as bad a character as were the Army drill sergeants. In keeping with the new Army policy for female recruits, perhaps the Air Force should have all male enlisted move about the base in pairs, to avoid the potential of abuse from sexually predatory female officers. There is at least one enlisted married female at Minot who would concur with that. At commissioning, military officers are expected, and agree to observe a higher code of conduct than the general enlisted and civilian population. Certainly that does not always happen, but exemptions from those higher expectations, based on race or gender are not in the interest of anyone but a hypocrite. The media’s failure to acknowledge the parallels between the Army sex scandals and Lt. Flinn puts them squarely in that category. Flinn was the first female B-52 pilot in the USAF.Flinn was discharged from the U.S. Air Force in 1997 after being charged with making a false statement, adultery, and disobeying orders. Flinn's trouble with the Air Force received widespread media attention at the time and was discussed in a U.S. Senate hearing on May 22, 1997.
Posted by ichbinalj at 7:37 AM