Rich Graduation Speaker at Morehouse College vows to pay off Student Loans for entire 2019 Class, EXCEPT for women, and those who worked their way through college. The Liberal Social Justice Warriors in the Democratic Party will find it hard to challenge the All American Spirit in that gesture. Morehouse College is an all male college. There were no women in the Class of 2019.

Robert Frederick Smith is an African-American businessman, investor, and philanthropist. A former chemical engineer and investment banker, he is the founder, chairman, and CEO of private equity firm Vista Equity Partners. In 2018, Smith was ranked by Forbes as the 163rd richest person in America. This 8th Generation African American, Robert F. Smith, is from Denver, CO. His family has been in America for 8 Generations. They lived through and worked through America’s Slavery Period and overcame. Slavery and Segregation slowed them down, but did not stop them from overcoming the Democratic Liberal Political Practices.

He is not a Fresh Of The Boat (FOB) Silicon Valley Instant Millionaire from some Muslim Country with a good Colonial Education System.


Robert F. Smith was giving the commencement address to the graduating class of Morehouse College when he made a surprise announcement: He would be paying off the student loans of the roughly 400 graduates.
It was just the latest substantial gesture from Mr. Smith, the richest black man in America, who until just a few years ago was practically unknown.
Mr. Smith grew up in a mostly black, middle-class neighborhood in Denver. Both of his parents had Ph.D.s in education, and he was ambitious from an early age. He applied for an internship at Bell Labs in high school, but was told he was too young. Mr. Smith called every Monday for five months and finally got the position.
He went to college at Cornell, studying chemical engineering, then took a job at Kraft General Foods. He got a master’s degree in business administration from Columbia, then worked at Goldman Sachs in San Francisco, advising companies including Apple, Hewlett-Packard and Microsoft.
■ Mr. Smith has a passion for music. In 2016, he was named chairman of the board of Carnegie Hall, the nation’s most prestigious concert stage. He bought and restored a storied resort, Lincoln Hills, outside Denver, where black jazz musicians like Duke Ellington once played. And he has founded programs to support music education and minority entrepreneurship in Austin, Tex., where he lives, and Chicago, where Vista has an office.

Here’s what you need to know about him:
■ Mr. Smith has amassed a fortune that Forbes estimates to be worth $5 billion by founding Vista Equity Partners, a private equity firm that focuses on buying and selling software firms.
■ Vista has about $46 billion in assets under management, according to Forbes. The company is privately held and does not publicly report its results, but it is believed to be one of the best-performing firms in the country, with annualized returns of more than 20 percent since its founding. 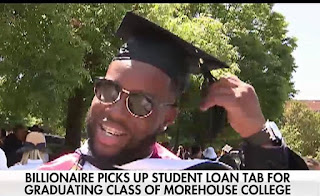 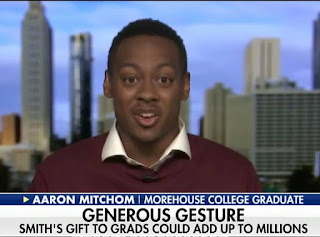 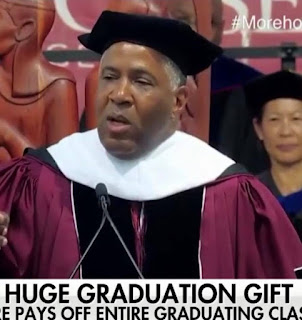 Mr. Smith has a flamboyant side as well. He favors three-piece suits, owns one of Elton John’s old pianos and hired John Legend and Seal — and a youth orchestra — to perform at his wedding on the Amalfi Coast. He named two of his sons, Hendrix and Legend, after Jimi Hendrix and Mr. Legend. He is married to Hope Dworaczyk, an actress and former Playboy model. (See FOOTNOTE)

Though he shunned the spotlight for many years, he has recently embraced a more public role, speaking at the World Economic Forum in Davos, Switzerland, and making major charitable contributions. Cornell renamed its School of Chemical and Biomolecular Engineering after Mr. Smith, and he has made major gifts to the National Museum of African-American History and Culture and other cultural institutions. In January, Mr. Smith donated $1.5 million to Morehouse to fund student scholarships and a new park on campus. 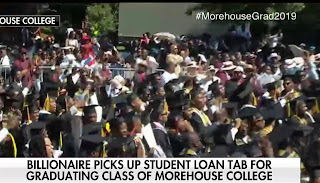 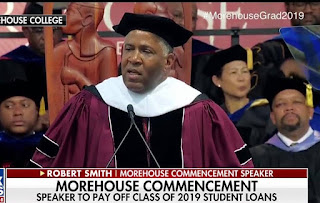 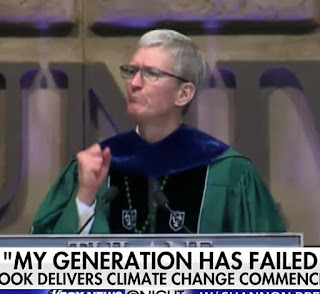 A TALE OF TWO COMMENCEMENTS!
THE BATTLE OF THE BILLIONAIRES!!

Tim Cook tells grads, “We failed you”!
Robert F. Smith says, “I declare you Debt Free”!
Robert F Smith, a Billionaire, vowed to pay off the Student Loan Debt for the 400 Morehouse graduates in the Class Of 2019.
Apple CEO, Tim Cook, a Billionaire told Tulane University grads, “My Generation failed you on Climate Change”!