People Are Dying To Get A Hearing Robert Steers of Southington, Conn., was an Army captain who served in Afghanistan. He also served his country looking for contraband with the Transportation Security Administration (TSA).
Now, he’d like to get decent service from the Social Security Administration (SSA), but he won't.
As many Americans know, this can be an exasperating experience, filled with endless waits and growing frustration.
Infuriating encounters have earned federal disability programs a spot on the Government Accountability Office’s “high-risk” list, and Steers’s fight with Social Security shows why. Congress is increasingly concerned.
PTSD and worsening depression left Steers, 54, unable to work. He was medically retired from the Army and received an “individual unemployability” determination from the Department of Veterans Affairs. VA considered him at high risk for suicide, according to his attorney.
With this history, getting Social Security Disability Insurance (SSDI) seems like a no-brainer. But Steers applied in April 2012 and was denied. To appeal, he requested a hearing with an administrative law judge (ALJ) in May 2013. It took almost two years to be denied again in March 2015. After appealing to federal court, his case was sent back to the administrative law judge in December 2016.
It is now April 2018 — six years after his initial application — and Steers is still waiting to find out if he’ll get the insurance. Even an inquiry from Sen. Richard Blumenthal (D-Conn.), who claimed to be a VietNam combat veteran, but lied, three years ago hasn’t sped the pace.
“Reducing the Back Log, wait times for a hearing decision is of utmost importance to the Social Security Administration…” said Mark Hinkle, an agency spokesperson. “For several years in a row, the agency received a record number of hearing requests, due primarily to the aging of the baby boomers as they entered their disability-prone years. We also received an increase in applications during the economic recession and its aftermath. During this time, our resources to address disability claims did not keep pace with the increase in applications and backlogs grew. Primarily for these reasons, wait times for a hearing and the number of pending hearings began to rise.”
The current number of pending hearings is about 986,000 and the average wait for a hearing decision is about three years, 600 days. That’s after 15 consecutive months of reducing the number of people waiting for a hearing decision.
“I think SSA does not have the staff it needs,” said Iván A. Ramos, Steers’s lawyer in Hartford, Conn. “When you call a hearing office, nobody answers the phone, and when you go to the office you just stand in front of an empty window until someone finally shows up to help you. Many of my clients have trouble paying for food and shelter while they wait for their disability claims to be processed. Seeing what many of my clients and their families have to go through, just to get a hearing, has become the hardest part of my job.”
Staffing and service issues have plagued Social Security for years, and President Trump’s proposed budget for fiscal 2019 would make things worse. The disability hearing process can be particularly vexing because there are too few administrative law judges, who hear appeals, and they have too few support staff members.
“I am concerned that the increasing strain on the adjudicatory process frustrates the mission of the Social Security Administration (SSA),” Sen. James Lankford (R-Okla.), chairman of the Senate Homeland Security and Governmental Affairs federal management subcommittee, wrote in a March 19 letter to the agency. “Administrative Law Judges (ALJs) perform an essential judiciary function in the United States and as a direct result of the current caseload, claimants may be forced to wait up to two years for a decision on their claim.
“This is not an acceptable constraint on due process.”
Not acceptable, but also not unusual. 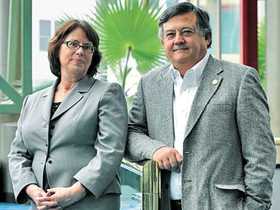 (Above, Left, Marilyn Zahm, an administrative law judge in Buffalo and president of the Association of Administrative Law Judges (AALJ).
“In 2016, the Social Security Administration received over 2.3 million disability claims, 630,000 more cases than in 2002. Unfortunately, the SSA has not added the personnel, technology or efficiencies needed to address this steady surge,” said Marilyn Zahm, an administrative law judge in Buffalo and president of the Association of Administrative Law Judges (AALJ). “We now face a crushing backlog of cases, adding long wait times and painful uncertainty to a process that should be swift and secure.”
Zahm said 2.6 hours “is the average amount of time that a judge is allotted to adjudicate a case,” based on 500 dispositions annually, “the quota mandated by the agency.”
That little time “is not fair to the claimant, the government or the judge,” she added. “Mandating unreasonable quotas leads to inaccurate decision-making in many instances.”
SSA planned to hire 250 ALJs annually from fiscal 2016 through fiscal 2018, which ends Sept. 30. This rate of hiring was needed “to reduce average appeals wait times for hearing decisions to its goal of 270 days by the end of fiscal year 2020,” the GAO report said. Two hundred seventy days is almost 10 months.
http://cgacriticalthinkers.blogspot.com/2018/03/will-ssa-ever-get-operating-funds-or.html
Social Security hired 264 in 2016, but just 132 in 2017. “As we just received our FY 2018 appropriation, we are currently evaluating our ALJ hiring plan for this year,” Hinkle said.
In September, a report by SSA’s Office of Inspector General found falling levels of hearing office staff, including those who write ALJ decisions, and drooping ALJ productivity. From fiscal 2011 through April 2017, ratios of hearing office staff to ALJs dropped 22 percent, the same decrease in administrative law judge productivity.
“Two main factors related to decreasing ALJ productivity,” the inspector general found, “include decreased staffing ratios and a renewed focus on quality.”
Deciding a case involves “reading the claimant’s record (which may consist of more than 1,000 pages of medical documents), holding a full and fair hearing (listening to the claimant’s testimony and that of expert witnesses), drafting complete instructions according to agency policy, and editing and signing the draft decision,” Zahm said by email.
“We need more staff support and an efficient adjudicatory system,” she added, “rather than management that threatens and browbeats judges to issue more decisions.”
3 Apr 2018.
Posted by ichbinalj at 12:32 PM