Burning Down Their Master's House 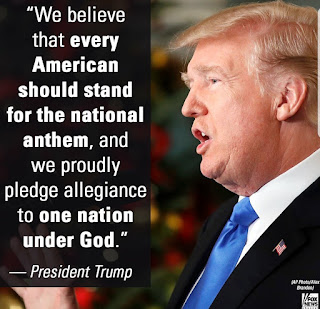 Historically, showing your colors, has referred to the flag ships fly to indicate their country of origin. Pirates, among others, have not always flown their true colors. They had good reason to be deceptive. They were motivated by evil intentions. Beginning in about the 18th Century, Showing Your True Colors, has come to mean showing your real character or personality, especially when it is unpleasant.We, as Americans, believe the most popular and respected colors in the International Arena are Red, White , and Blue. These colors define the American Patriotic Spirit. They are the only colors in Old Glory, the American Flag. When American show their true colors, they usually stand, salute, place their right hand over their heart, and cheer. If they they are not in the military, they will usually remove their hat and place it over their heart. Under no circumstance have they ever sat in protest, turned their backs, or bent down on their knees in utter and complete disrespect to our National Ensign. This holds true for the playing of the National Anthem.

Dishonoring the American Flag has been recognized by the Supreme Court as a means of political speech and social protest. This uniquely American Right stems from the United States Constitution. In the United States, freedom of speech or expression is protected by the1st Amendment to the Constitution. This Right does not apply in private employment situations, which are usually controlled by fiercely negotiated contracts of employment.
Methinks the millionaire football players do protest too much. Fifty years ago some of these players would have been in the cotton fields instead of on the football fields. They are burning down their master's home. NBA players appear to show sympathy to the NFL players and their so-called social protest. Some of them have spent more time in Court than on the Basketball court. They are treading a fine line between extravagance and unemployment. 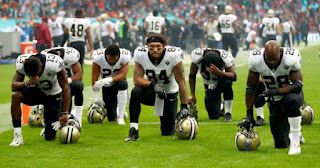 The recent controversy swirling around the NFL players who refuse to stand for the National Anthem and the showing of the American Flag is just another incidence of Fake News reporting and misinformation. It is pure propaganda. There is no Constitutionally Protected Free Speech Right involved. It is a work place dispute governed by a private employment contract between the football  players and the owners.
This is a Leftist attempt to kill two birds with one stone. On the one hand it enrages the fans because of the blatant disrespect shown to our sacred National Symbols. On the other, it furthers the Left's attempts to eat away at the strong masculine image of the American male by blurring gender lines and feminizing national sports. 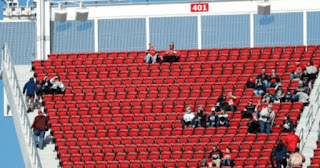 The fans have stop attending games in record numbers leaving many stadiums with empty seats. Many have cancelled ESPN subscriptions and have stop watching games on television. There has been talk of an all out boycott of the NFL and possibly the NBA. President Trump, among others, has mentioned such a possibility.
The introduction of Politics into an American National Pastime has angered many sports fans. Sports have always been an avenue of relaxation where people get away from stressful situations. Sports have have served as common ground for Americans of diverse backgrounds to break the ice and to get acquainted. Even those who do not know the Rules of The Game and cannot understand game strategy, have found enjoyment in the spectacular pageantry and other aspects of the game. Half-time shows earn millions in advertising costs. 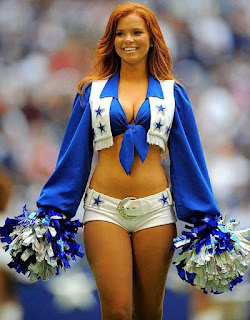 Sports is the one subject, other than the weather, where rich and poor, Black and white, and old and young can strike up a conversation. The one thing they had in common was their love for America and respect for America's National Symbols. Everyone should stand and cheer for the Red, White and Blue. 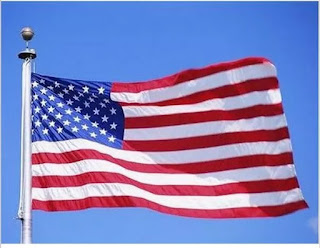 In stead of catering to their fans, the players and owners are cannibalizing their own market. No business that insults its target market can prosper. The resulting decrease in revenue eats away at the Owners' profits, and makes star players less attractive to corporate sponsors. A house divided cannot endure. 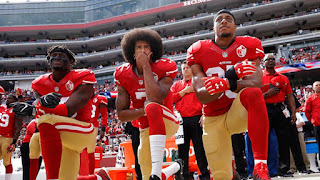 The Poster Child for this controversy is Colin Kaepernick, pictured above center. He is an aging Quarterback with diminishing skills who was rumored to be on the verge of being traded to another team. He played the Race Card and caused many other weak minded Black Players to follow his example. Instead of standing for the National Anthem and the Posting of the Colors, they dropped to their knees.
Calling their protest, Taking a Knee, they were borrowing a term and a practice long used in the Black Baptist Church. Black Preachers who could not read the Bible had memorized the passages in the book of Romans (14:11) that says: "As certainly as I live, declares the Lord, every knee will bow to me, and every tongue will praise God." ; and in Phillipians that at the name of Jesus every knee should bow, in heaven and on earth and under the earth, and every tongue confess that Jesus Christ is Lord".
The Act of Public Prayer has always been referred to as "Taking A Knee" or "Kneeling In Prayer". It was practiced by Civil Rights Devotees during the height of the Civil Rights Movement. Along with Sit-Ins, there were Pray-ins, Lay-ins and other types of  Civil Protest-Ins.
Kaepernick, who like Barack Obama is one half Black and was raised by white parents, claimed to be protesting racial injustice in America and said that he would not stand for the National Flag of a Country where police officers killed Black People indiscriminately. 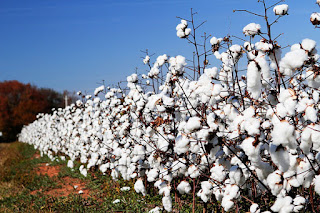 Southern plantation workers and sharecroppers earned about 90 cents an hour for chopping cotton and $2.00 per hundred pounds for picking cotton. The average NFL player's salary may be ove $10 million a year, plus untold millions in advertising contracts and bonuses. Colin Kaepernick walked away from a $14 million a year contract offer to become a Free Agent. He has remained unsigned by any NFL Team.
Anonymous sources hinted that he was secretly being paid by George Sorros and Left leaning groups to sow discord among the NFL players who are predominately Black. Regardless of his motivation, he has created a real Donnybrook.
Posted by ichbinalj at 10:22 PM