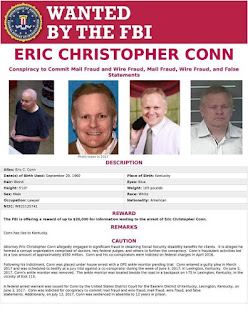 Disgraced former disability lawyer Eric C. Conn plotted his escape for a year before absconding from home detention weeks before he was to be sentenced in a massive fraud case, according to a federal indictment unsealed Monday October 16, 2017.
The indictment levels new charges against Conn and Curtis Lee Wyatt, who worked for Conn at his law office in Stanville and allegedly tested security at the U.S. border with Mexico on Conn’s behalf.
The indictment charges the two with conspiring on Conn’s escape from June 2016 — just two months after Conn was first indicted — to June 2017. Conn was scheduled to be sentenced on July 14 in his federal criminal case, but absconded on June 2.

The indictment charged that Wyatt, of Raccoon in Pike County, took a number of steps to help Conn escape, including opening a bank account in Wyatt’s name that Conn used to transfer money out of the country.
Wyatt also allegedly bought a 2002 Dodge Ram pickup truck from an unnamed seller in Somerset in May for $3,425, then delivered it to Conn in Lexington on June 1 for him to use in the escape. Wyatt had the truck registered under the name Disability Services LLC.
Conn was on home detention while awaiting sentencing, but had permission from the federal probation office to be in Lexington June 1 and 2 to meet with his attorney and prosecutors, according to court records.
Conn cut the electronic monitor from his ankle the evening of June 2 and took off. He put the monitor inside a pouch with a metallic lining designed to suppress electronic signals and threw it out beside Interstate 75 near the Newtown Pike exit.
Conn allegedly ordered the bag and had it shipped to Wyatt, who later gave it to Conn in Lexington.
In the weeks leading up to the escape, Conn also had Wyatt use pedestrian entrances to Mexico at Nogales, Ariz., and Columbus, N.M., in order to test security procedures for people crossing into Mexico from the U.S., the indictment said.
The FBI found the truck in New Mexico.
In addition to conspiracy, the indictment charges Wyatt with helping Conn escape, conspiring in Conn’s failure to appear, abetting Conn’s failure to appear and with lying to the FBI.
Wyatt allegedly told the FBI he took the Dodge truck to Lexington for reasons unrelated to Conn.
The indictment also added charges of escape and failure to appear against Conn. The charges are punishable by up to five years in prison each.
The indictment did not say that Conn actually crossed the border into Mexico, and the FBI has not commented on Conn’s suspected whereabouts.
The indictment was returned more than a month ago, but was sealed until Monday.
Wyatt’s attorney, Thomas Lyons, said Monday that he did not think Wyatt has been arrested, but rather will receive a summons to make an initial court appearance this week.
The indictment also mentions an un-indicted co-conspirator. That can refer to someone who is cooperating with authorities in a case.
There is little information about the unnamed co-conspirator in the indictment. It said Wyatt took Conn’s Toyota Highlander back to Pikeville after giving Conn the pickup truck and that he gave the unnamed person the keys.
The alleged co-conspirator then sent Conn a text message that said: “The car thing is a done thing. I need to so something with what was sent back to me from the car. I don’t have any place to put it.”
The indictment did not explain what the message meant.
Lyons said he did not know the identify of that person.
Wyatt described himself as “kind of the fill-in person” at Conn’s law office when he was interviewed in 2012 by an investigator looking into whether Conn made illegal campaign contributions in a state Supreme Court race.
Wyatt said he started working for Conn in 2011. Among other duties, Wyatt said he usually handled firing employees for Conn. He said he had fired 40 to 50 people in a year, according to the investigator’s report.
Wyatt also allegedly played a role in trying to discredit an employee at the Social Security Administration who had tried to bring attention to potential improprieties by Conn and Administrative Law Judge David B. Daugherty, an ALJ at SSA who rubber-stamped disability claims for Conn.
Conn came up with a scheme to have his employees follow the woman, Sarah Carver, to try to discredit her by catching her not working from home on days when she was supposed to, according to sworn statements from other former Conn employees to U.S. Senate investigators.
Two longtime Conn employees said Wyatt secretly videotaped Carver going into the Social Security office in Huntington, W.V., but held up a newspaper from another day to make it appear she was fudging on her work-from-home time.
Former Conn employees also said Conn had Wyatt smash computer hard drives with hammers and then burn them after Conn became concerned about scrutiny of his relationship with Judge Daugherty.
Conn represented thousands of Eastern Kentucky residents in successful claims for federal disability benefits through the Social Security Administration, but pleaded guilty in March to stealing from the government and to bribing a Social Security judge.
Conn admitted putting false evidence of clients’ physical or mental disabilities in their claims, paying doctors to sign forms with little scrutiny, and giving more than $600,000 cash to Judge Daugherty.
Daugherty pleaded guilty in the case, and a psychologist from Pikeville, Dr. Bradley Adkins, was convicted of signing forms for Conn that included false information.
Another former Social Security Administrative Law Judge, Charlie Paul Andrus, pleaded guilty to being part of the scheme to discredit Carver.
More than a dozen charges against Conn in the original 2016 indictment remain in place. Attorney Eric Conn could be sentenced to life in prison if caught and convicted.

LOOKING FOR HUMOR IN A DARK STORY; THERE IS NONE HERE.

Been quite a week here in the Kentucky mountains. The capture of self-proclaimed political refugee (Eric Conn) by a masked Honduran SWAT team while he was utilizing his WiFi at a Pizza Hut in the beach town of La Ceiba, Honduras has produced a wave of hilarity and pure delight in the mountains.
The astonishing variety of social media postings and nonstop chatter has revealed a level of satire that has produced no shortage of laughter. This humorous interlude is in sharp contrast to the gloom that has descended over the mountains. For more than two years the dark clouds caused by Conn and his colorful array of conspirators has stubbornly hung over this poverty-stricken region.
More: Fugitive Kentucky lawyer Eric Conn captured in Honduras after six months on the lam
More: Email to newspaper claiming to be from Eric Conn lists terms of surrender
Don't ever remember a story capturing the imagination of so many at such an intense level. John Grisham could not have imagined the bizarre facts. If he had written the story – would be some sort of comedic farce quickly labeled as fiction.
Now that the laughter has died down, some sobering thoughts. About 800 of Conn's former clients have lost their benefits. They have also lost their health insurance and are receiving ominous letters from the Social Security Administration demanding those who struggled to exist on $800 per month pay back amounts often in excess of $100,000. Had three confirmed suicides. The true number is likely higher. You wouldn't know these facts by reading the national publicity.
More: Fugitive lawyer Eric Conn was captured at a Pizza Hut in Honduras, FBI says
More: Indictment: Fugitive lawyer Eric Conn had help in escape plot a year before he disappeared
More: Fugitive lawyer Eric Conn, spotted in New Mexico, sentenced in absentia to 12 years
The Social Security Administration envisioned by FDR was designed to be a compassionate agency to alleviate the hardships of poverty. The agency throughout the Conn crisis has been anything but compassionate. Instead, their mission is to punish Conn's vulnerable and innocent clients for the crime of guilt by association. Conn's outrageous antics have fueled this inferno of guilt by association.  The ironic and infuriating part of the equation is there never was any true association. Still have yet to meet the first client who met Conn. The masked members of the Honduran SWAT team spent more time with Conn than his former clients.
While it makes enjoyable reading to read about Conn and sells newspapers, there is a more important story that is briefly mentioned.  It's about the folks left behind. They don't think any of this is funny.
Ned Pillersdorf is a criminal defense attorney and managing partner with the Prestonburg, Kentucky law firm of Pillersdorf, DeRossett and Lane.
http://www.kentucky.com/news/state/article179190616.html#storylink=cpy
Posted by ichbinalj at 8:07 PM