LEXINGTON, KY — David Black Daugherty, the former Social Security administrative law judge who was based in Huntington, was sentenced Friday to spend four years in federal prison for his role in a multi-million dollar fraud scheme. 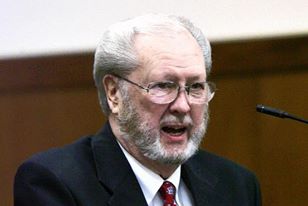 Retired Social Security Administrative Law Judge David Daugherty was sentenced to 4 years in prison Friday August 25, 2017.
Daugherty, 81, approved more than 3,000 Social Security disability cases submitted by a now convicted Kentucky lawyer in exchange for money. He pleaded guilty earlier to two counts of receiving illegal payments.
Daugherty’s attorney asked the federal judge at Friday’s sentencing in Lexington, Kentucky, to allow his client to self-report to prison in order to give him time to help his wife adjust to the change but the judge denied the request saying Daugherty, who now lives in Myrtle Beach, had all summer to get his wife ready. The judge also said Daugherty needs to be in custody immediately because he previously attempted suicide.
Daugherty was part of the scheme with Pikeville, Kentucky lawyer Eric Conn and Dr. Alfred Bradley Adkins, a clinical psychologist from Pikeville.
Conn would send the cases of his clients seeking Social Security disability to Daugherty who then would approve them for the benefits. .Adkins would back the appeals with bogus medical evidence. Daugherty admitted he received $609,000 in payments as part of the scheme.
The original indictments alleged the trio conspired to seek $600 million from the Social Security Disability Fund, regardless of whether applicants involved were qualified to receive the benefits. 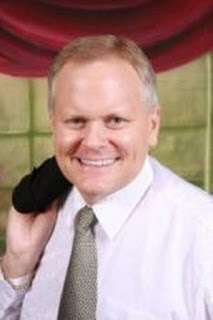 Attorney Eric Conn remains on the loose on the lam somewhere in the world.
Conn wasn’t shy about recruiting clients. He was all over southern West Virginia and Eastern Kentucky billboards with a mannequin sitting atop the sign. He billed himself as “Mr. Social Security” and wore his position as a badge of honor in fighting for workers hurt on the job.
Prosecutors said Conn was drawing out nearly $10,000 a month from his bank account and giving it to Daugherty to rule in favor of his clients.
Conn, who would file all of his clients disability applications in Prestonsburg, Kentucky office to make sure Daugherty received the cases, took off before he sentenced and remains on the run. A judge still sentenced him to 12 years in prison.
Adkins, who was convicted on several charges in June, is scheduled to be sentenced Sept. 22.
Daugherty, who was allowed to retire when the scheme originally was discovered a few years ago, wasn’t fined Friday but ordered to pay nearly $94 million in restitution. The judge admitted he doubted any of the money would ever be collected.
By Jeff Jenkins in News | August 26, 2017

A former social security administrative law judge (ALJ) was sentenced today to four years in prison for his role in a scheme to fraudulently obtain more than $550 million in federal disability payments from the Social Security Administration (SSA) for thousands of claimants.
Acting Assistant Attorney General Kenneth A. Blanco of the Justice Department’s Criminal Division, Special Agent in Charge Michael McGill of the Social Security Administration-Office of Inspector General’s (SSA-OIG) Philadelphia Field Division, Special Agent in Charge Amy S. Hess of the FBI’s Louisville Field Division, Special Agent in Charge Tracey D. Montaño of the IRS Criminal Investigation (IRS-CI) Nashville Field Office and Special Agent in Charge Derrick L. Jackson of the U.S. Department of Health and Human Services-Office of the Inspector General (HHS-OIG) Atlanta Regional Office made the announcement.
David Black Daugherty, 81, of Myrtle Beach, S.C., was sentenced by U.S. District Judge Danny C. Reeves of the Eastern District of Kentucky, who also ordered Daugherty to pay restitution of over $93 million to the SSA and HHS. Daugherty pleaded guilty in May 2017 to two counts of receiving illegal gratuities.
According to admissions made as part of his guilty plea, beginning in 2004, Daugherty, as an ALJ assigned to the SSA’s Huntington, W. Va., hearing office, sought out pending disability cases in which Kentucky attorney Eric Christopher Conn represented claimants and reassigned those cases to himself. Daugherty then contacted Conn and identified the cases he intended to decide the following month and further solicited Conn to provide medical documentation supporting either physical or mental disability determinations. Without exception, Daugherty awarded disability benefits to individuals represented by Conn – in some instances, without first holding a hearing. As a result of Daugherty’s awarding disability benefits to claimants represented by Conn, Conn paid Daugherty an average of approximately $8,000 per month in cash, until approximately April 2011. All told, Daugherty received more than $609,000 in cash from Conn for deciding approximately 3,149 cases.
As a result of the scheme, Conn, Daugherty, and their co-conspirators obligated the SSA to pay more than $550 million in lifetime benefits to claimants based upon cases Daugherty approved for which he received payment from Conn.
Daugherty was indicted last year, along with Conn and Alfred Bradley Adkins, a clinical psychologist. The defendants were charged with conspiracy, fraud, false statements, money laundering and other related offenses in connection with the scheme.
Conn pleaded guilty on March 24, to a two-count information charging him with theft of government money and paying illegal gratuities, and was sentenced in absentia on July 14 to 12 years in prison. Conn absconded from court ordered-electronic monitoring on June 2, and is considered a fugitive. He remains under indictment. On June 12, Adkins was convicted after a jury trial of one count of conspiracy to commit mail fraud and wire fraud, one count of mail fraud, one count of wire fraud and one count of making false statements. Adkins is scheduled to be sentenced on September 22.
The SSA-OIG, FBI, IRS-CI and HHS-OIG investigated the case. Trial Attorney Dustin M. Davis of the Criminal Division’s Fraud Section and Trial Attorney Elizabeth G. Wright of the Criminal Division’s Money Laundering and Asset Recovery Section are prosecuting the case, with previous co-counsel including Assistant U.S. Attorney Trey Alford of the Western District of Missouri and Investigative Counsel Kristen M. Warden of the Justice Department’s Office of the Inspector
Posted by ichbinalj at 10:31 PM