A former Social Security Administration (SSA) Administrative Law Judge (ALJ) pleaded guilty on  May 13, 2017 to taking more than $609,000 in bribes from a disability lawyer who called himself “Mr. Social Security.”
The former judge, ALJ David Black Daugherty, 81, of Myrtle Beach, South Carolina, pleaded guilty to two counts of receiving illegal gratuities, according to a press release from the U.S. Department of Justice and stories by the Washington Times and the Lexington (Kentucky) Herald-Leader.
Daugherty, who heard cases in West Virginia, was accused of taking payments to make favorable rulings in more than 3,100 cases for clients represented by Kentucky lawyer Eric Conn, obligating the government to pay more than $550 million in lifetime disability payments.
Conn, who once called himself “Mr. Social Security,” pleaded guilty in March. He is scheduled to be sentenced in July, according to the Herald-Leader.
Daugherty admitted he sought out Conn’s cases, told him what type of medical evidence to submit, and awarded benefits without holding hearings. Daugherty accepted the illegal payments between November 2004 to April 2011, according to the press release.
The government is holding new hearings to determine whether the claimants in the cases are entitled to benefits. More than half of the applications have since been disapproved, according to the Washington Times. Many have unfortunately committed suicide.
The actual payout by the Social Security Administration in the cases was $46.5 million, an amount that Conn promised to pay the government. He also promised to pay $5.7 million, representing the fees he earned in the cases.
Daugherty has agreed to pay the government $609,000. He is scheduled to be sentenced on Aug. 25. The charges carry a maximum prison sentence of four years, according to the Herald-Leader.
Charges are still pending against a psychologist accused of falsifying mental impairment evaluations.
(By Debra Cassens Weiss)


The 81-year-old David Black Daugherty pleaded guilty Friday May 13, 2017 in federal court in Lexington to two counts of taking illegal gratuities. Daugherty agreed to pay the government $609,000 as part of his plea. 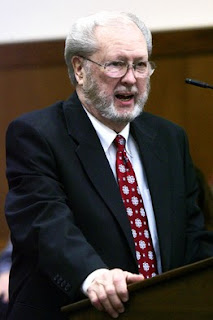 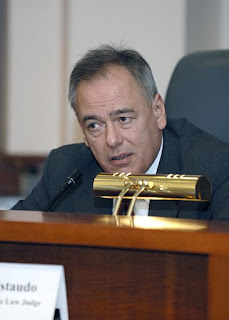 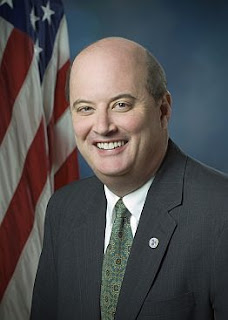 (Above, see SSA Commissioner Michael Astrue)
Judge Daugherty was working to eliminate the "back log".
The Chief Administrative Law Judge had and has day-to-day oversight of all of SSA's's hearing operations.
Judge Cristaudo testified before Congress that he wanted to implement a comprehensive plan to eliminate the backlog of hearings. By eliminating the backlog, he would improve hearing office productivity and the timeliness of SSA hearings and decisions.
Judges like ALJ Dave Daugherty were at the heart of his operation. He testified that he would be monitoring the workloads of these Judges and their cases carefully.
He had selected a number of excellent judges including Judge Daugherty. He needed more judges like Judge Daugherty who were well-suited to SSA's type of work - judges who were capable of thriving under the workload demands of SSA's high-volume, electronic hearing operation. Judge Daugherty was the most prolific high producer that he had.
After successfully eliminating SSA's 1,000 or more day-old cases in FY 2007, he focused on reducing the 900 or more day-old cases by the end of FY 2008.  He testified that he believed a backlog of aged cases interfered with the normal hearing office workflow. Productivity was up because of Judge Daugherty and others who decided cases without holding Hearings.  The new judges  were trained by the highest-producing judges in SSA's ALJ corps, judges like Judge Dave Daugherty.
The complete text of Chief Judge Frank Cristaudo's testimony can be read at:
(See   https://www.ssa.gov/legislation/testimony_091608.html)
Posted by ichbinalj at 1:58 PM