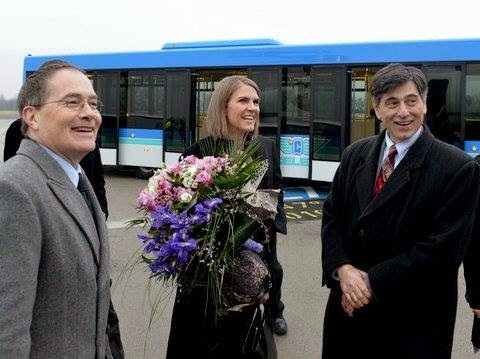 New US Ambassador to Hungary Colleen Bradley Bell, pictured above in center, arrived in the Hungarian capital Budapest. The United States’ highest-level diplomatic representation has resumed following an almost two-year period in of absence of an American Ambassador. 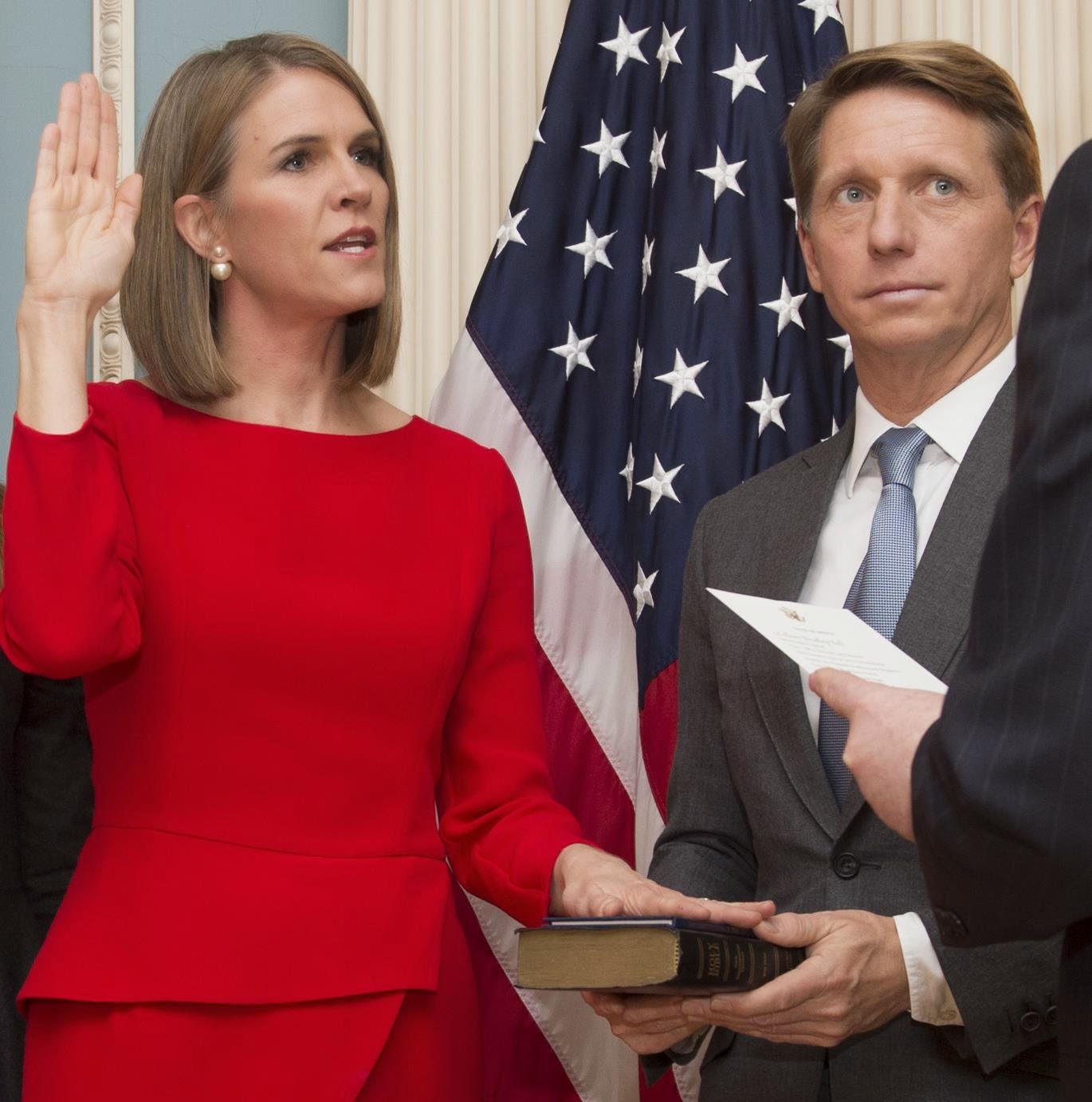 (Ambassador Bell being sworn-in in December 2014)
She was received on behalf of the government by Levente Magyar, State Secretary at the Ministry of Foreign Affairs and External Economic Relations (KKM), at Budapest’s Ferenc Liszt International Airport.
Mr. Magyar highlighted that the Hungarian government welcomes the ambassador with utmost openness and affection, saying that [the cabinet] “is looking forward to working together with marked optimism”.
The Government is convinced that in the near future, a dialogue will evolve between Hungary and the US which,  will navigate relations in a constructive direction. Economic and military cooperation between the two parties has never been as outstanding and strong as now.
The State Secretary added that with Colleen Bell’s arrival, the United States’ highest-level diplomatic representation has, at long last, resumed, following an almost two-year period in the absence of an US ambassador. 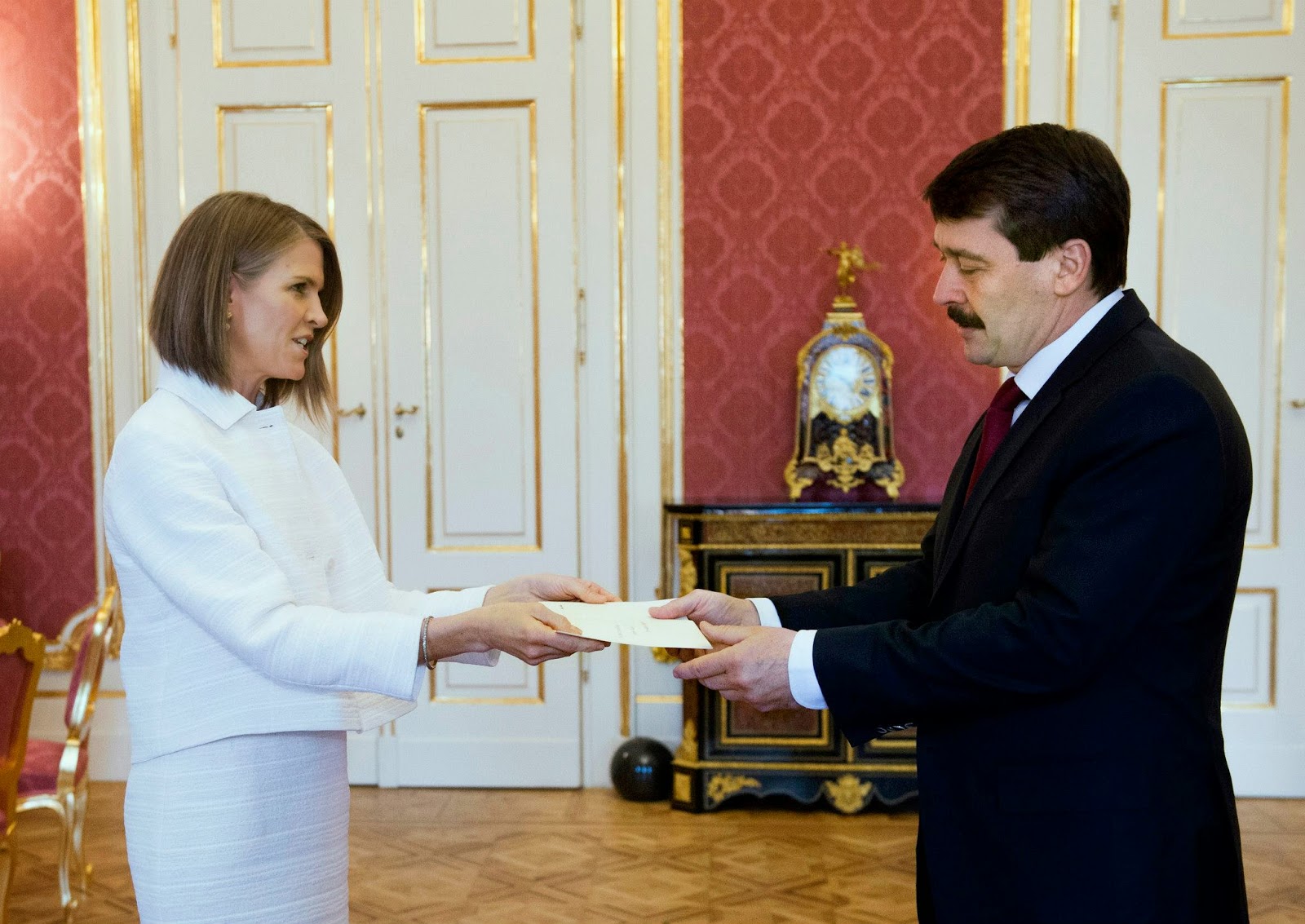 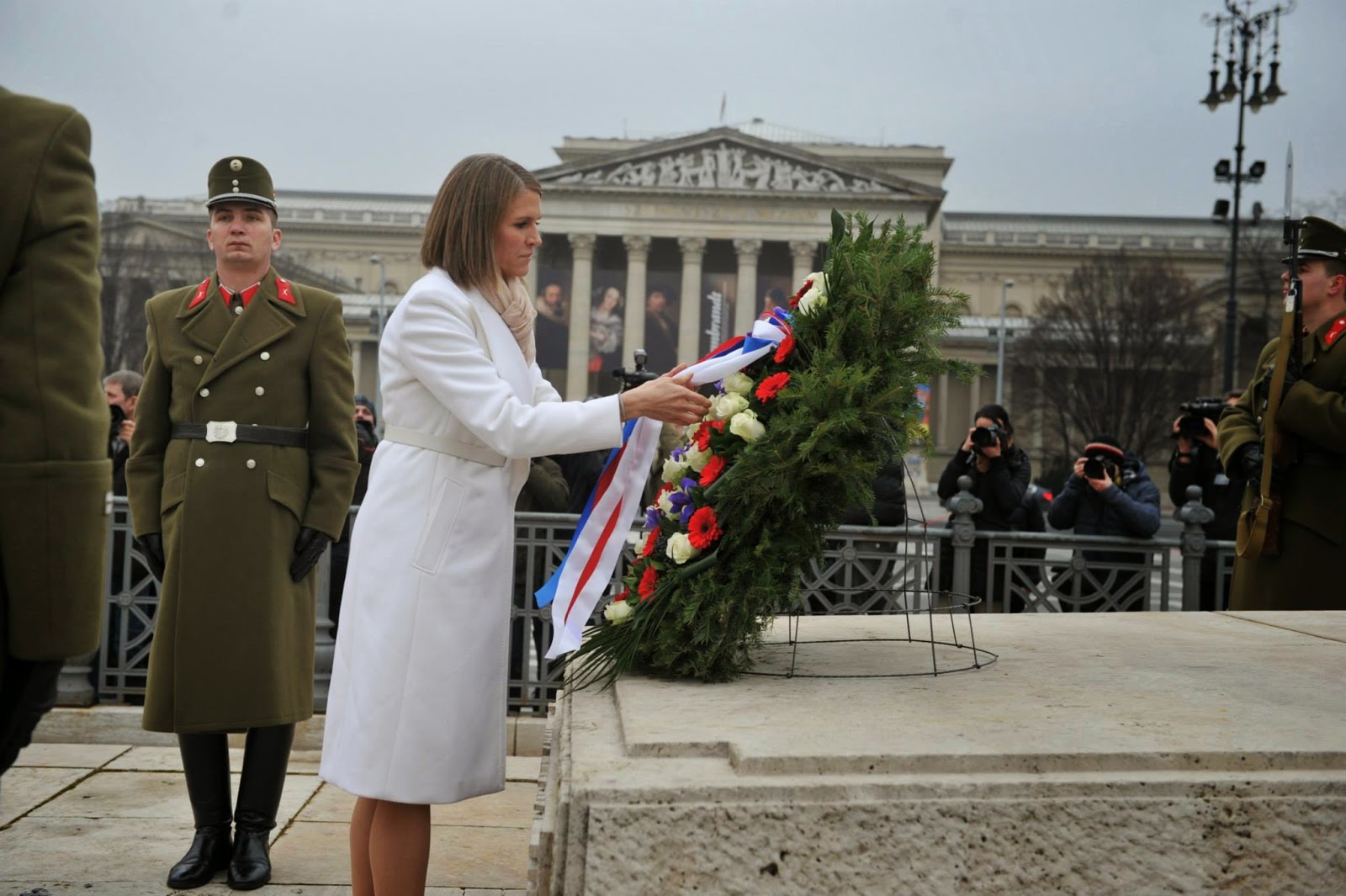 After presenting her credentials, Ambassador Bell laid a memorial wreath on the Tomb of the Unknown Soldier in Heroes’ Square, in the name of the people of the United States of America. 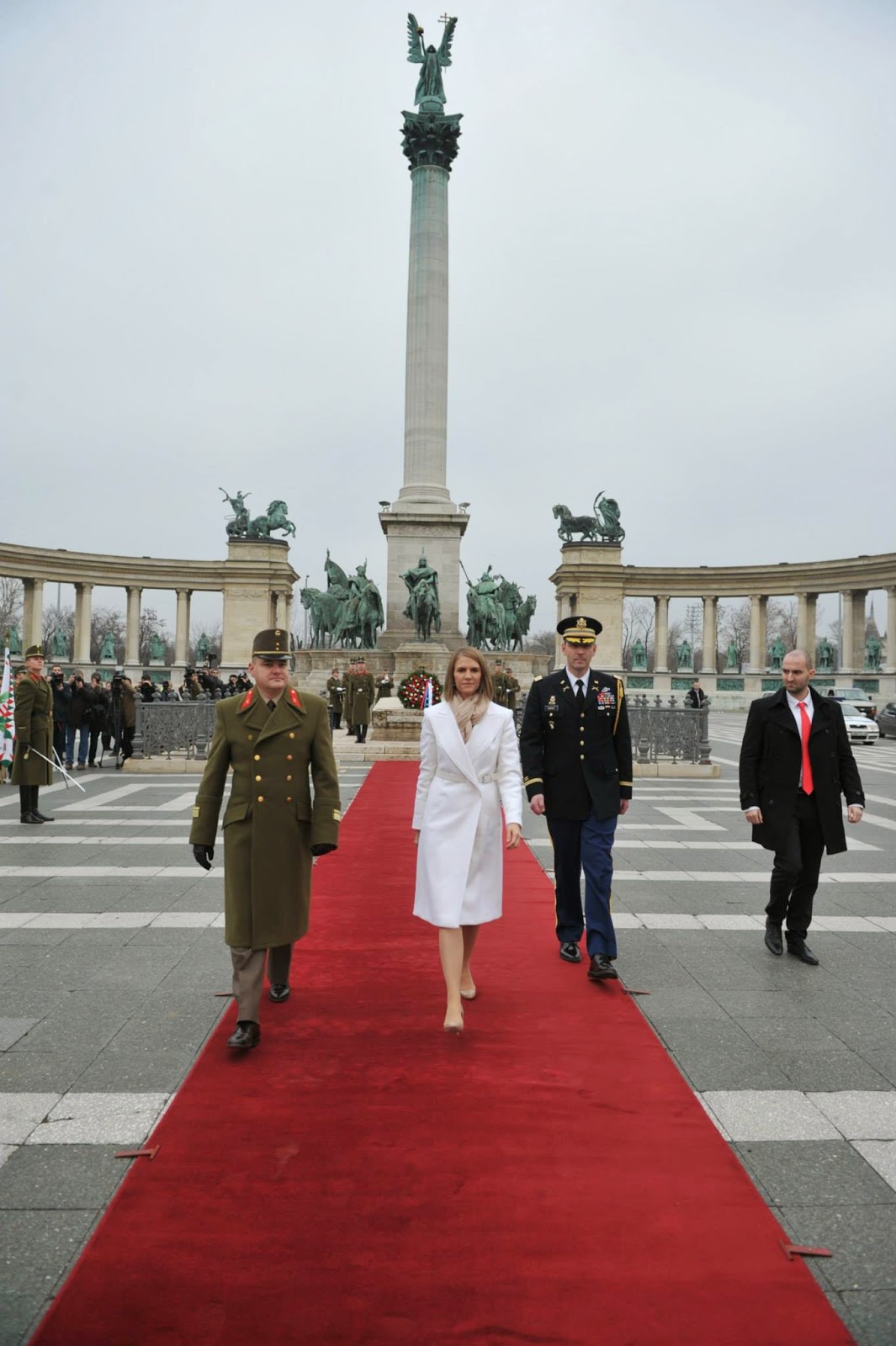 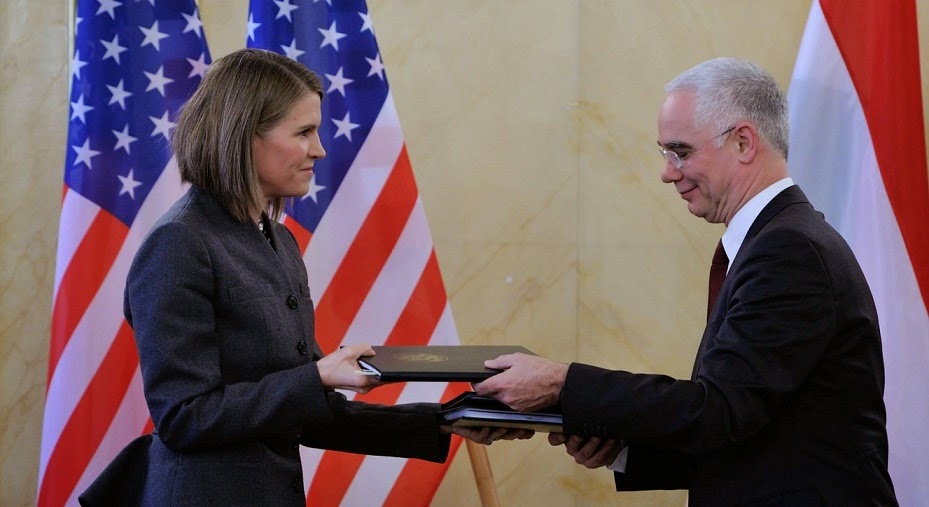 Colleen Bradley Bell (born January 30, 1967) is an American television producer, philanthropist and advocate for the environment, arts and social causes. Bell resided in Los Angeles with her husband, television writer/producer Bradley Bell, and their four children.
On November 6, 2013, Pres. Obama announced his intent to nominate Ms. Bell as U.S. Ambassador to Hungary. The nomination was controversial and Senator John McCain called her "totally unqualfied". On December 1, 2014, the U.S. Senate voted 50-36 to invoke cloture on Bell's nomination, thus cutting off a Republican-led filibuster. On December 2, 2014, the Senate voted 52-42 to confirm Bell. Bell faced criticisms from Republicans, led by McCain, and commentators over her perceived lack of expertise on Hungary and its current geopolitical situation, as well as for the political nature of her appointment.
Bell was confirmed in December 2014 as the United States Ambassador to Hungary. 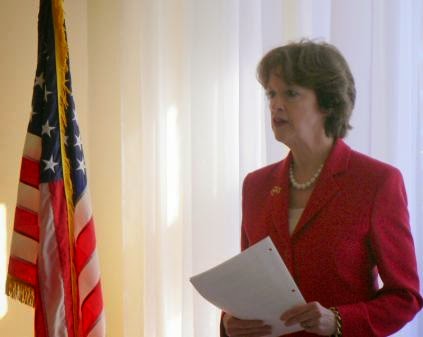 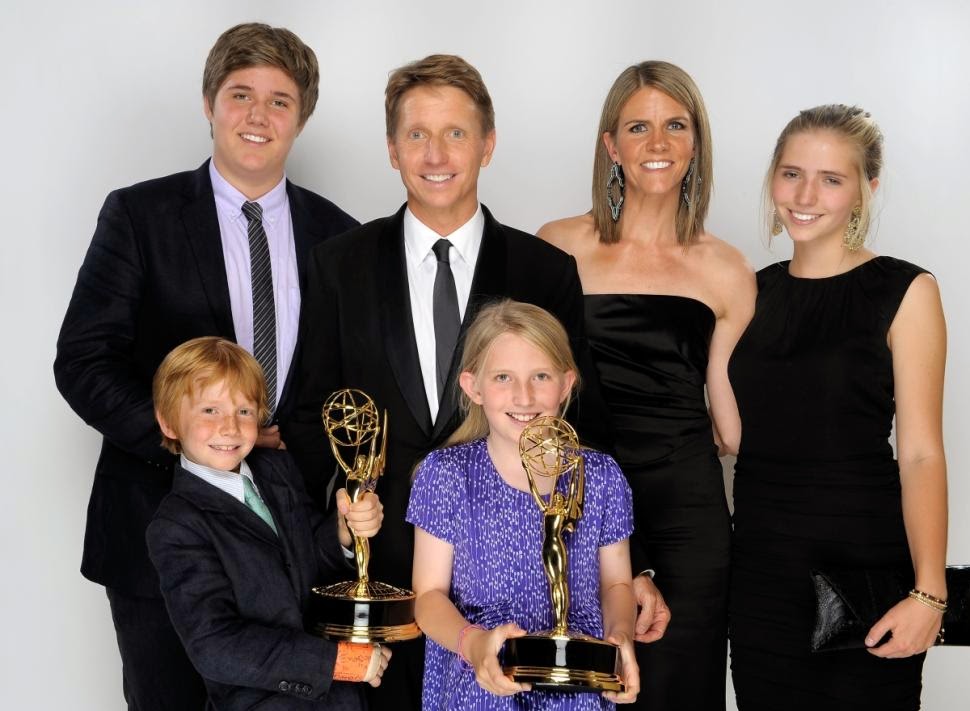 Colleen Bradley Bell, is not only a soap opera producer, she is soap royalty.
Her husband Bradley Bell is scion of soap opera mogul William Bell. The late William Bell worked as a head writer at “Days of Our Lives” before striking gold with his own series “Bold and the Beautiful,” “The Young and the Restless” and the now-defunct “Another World.”
Bell has also served as a Kennedy Center trustee since 2012, alongside Caroline Kennedy, who is U.S. Ambassador to Japan.
She is somebody that the President has confidence will be able to maintain our relationship with the government and the people of Hungary ... she was chosen because the President has complete confidence in her ability to represent the United States in Hungary. 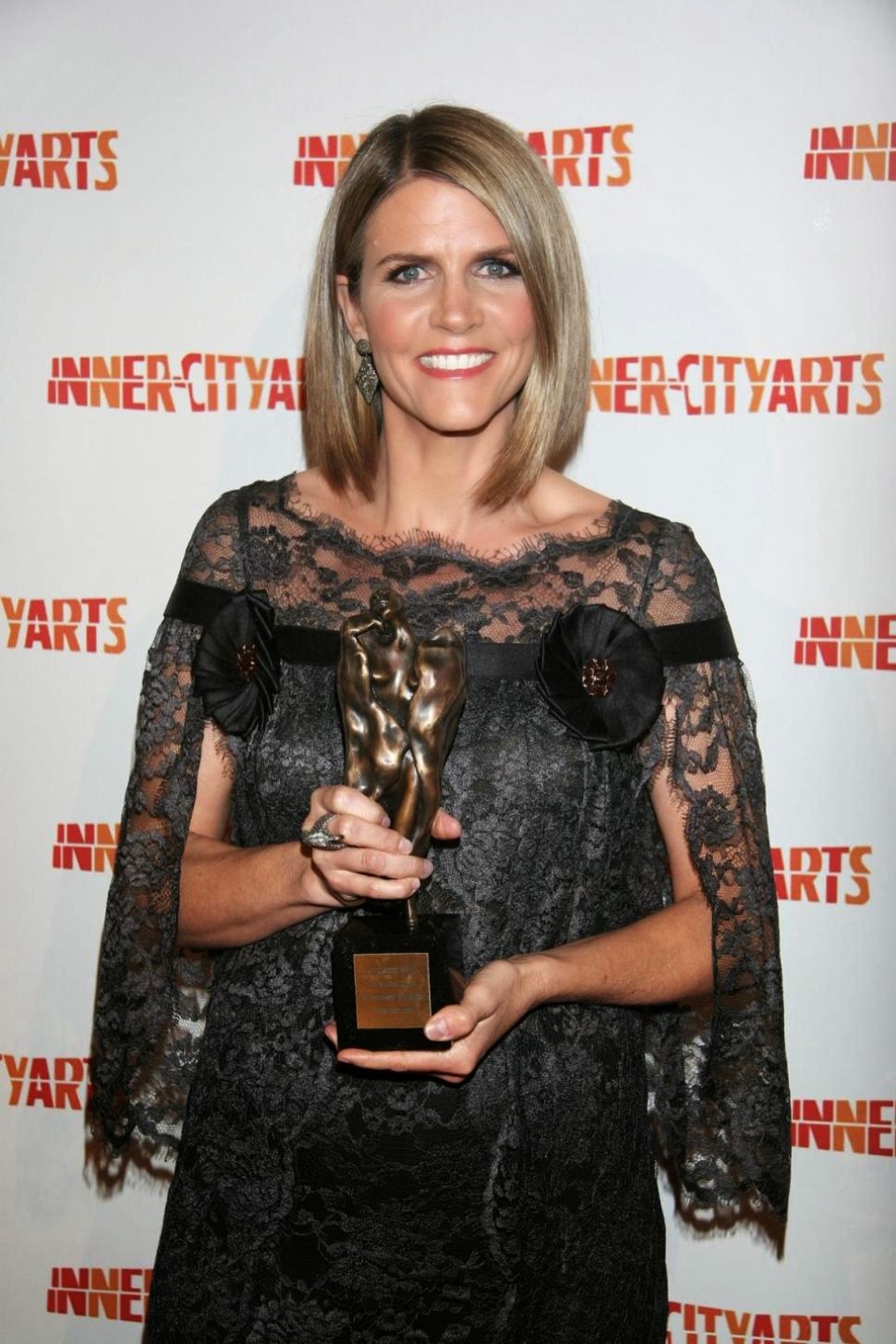 When describing her qualifications for the job, the newly confirmed U.S. ambassador to Hungary cited a "product" she helped develop that is exported to "more than 100 countries, for daily consumption with more than 40 million viewers."
The product Colleen Bradley Bell produced is the soap opera The Bold and The Beautiful.
The big political donor who becomes an ambassador to a relatively small country is something of a Washington punch line and also a tradition. Presidents have done this for decades. But critics say the Obama administration has taken it too far.
According to the Center for Responsive Politics, Bell and Mamet each raised at least $500,000 for President Obama's campaign in 2012.
At Bell's confirmation hearing, Sen. John McCain, R-Ariz., asked her about America's strategic interest in Hungary. The answer that followed could best be described as a word soup.

"Well, we have a strategic interest," she said. "In terms of what are our key priorities, in Hungary. I think our key priorities are to, um, improve upon as I mentioned the security relationship, and also the law enforcement and to promote business opportunities, increase trade ..."
McCain wasn't impressed. He cleared his throat and asked the question again.
"It's really disgraceful," said McCain following the confirmation vote, which fell neatly along party lines.
Especially, he says, because Hungary is in a perilous state politically, teetering between the influence of Western democracies and Vladimir Putin's Russia. As for Bell's qualifications, White House press secretary Josh Earnest grasped for words at yesterday's press briefing.
"Well she certainly is somebody again, that, that is, has, has had her own distinguished private sector career," said Earnest.
According to the American Foreign Service Association, in Obama's second term a little more than 40 percent of ambassador nominees have been political rather than career diplomats. In recent past administrations the share has been less, 30 percent.
When author Kati Marton was 5 years old, growing up in Hungary, the first American she met was the U.S. ambassador. Her parents, journalists, were deemed enemies of the state and jailed, she says.

"Ambassador [Christian M.] Ravndal made a point of looking after my older sister and me who had been left as, well, political orphans," said Marton, recalling a defining moment in her childhood.
She says he visited them, pulling up in a big Buick with an American flag on the front, a deeply symbolic move in Cold War Hungary.
"The American ambassador in countries that are often forgotten by Washington can play an enormous role, a symbolic role, standing in for what America stands for," said Marton.
Marton is the widow of Ambassador Richard Holbrooke and says she knows rewarding donors is part of the way Washington works.
This year the American Foreign Service Association, which represents career diplomats, came out with four simple qualifications for an ambassador.
"Relevant international experience," explains Bob Silverman, the group's president. "High-level government or other high-level policy articulation experience, good management skills. Good leadership skills."
He opted not to say whether Bell, Mamet and the other recent donor ambassadors met that standard.
Posted by ichbinalj at 10:30 AM