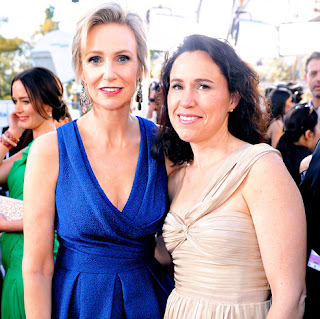 Just one month after announcing that she and her wife of three years, Dr. Lara Embry, are going their separate ways, Jane Lynch has officially filed for divorce in an L.A. County Court, TMZ reports.
The Glee actress, 52, cited "irreconcilable differences" as the reason for the couple's split. The documents state that the pair have been separated since this past February.

"Lara and I have decided to end our marriage," Lynch said in a statement to Us magazine in June 2013. "This has been a difficult decision for us as we care very deeply about one another. We ask for privacy as we deal with this family matter."

Lynch and Embry, 44, tied the knot in a ceremony in Sunderland, Mass. in June 2010, less than one year after meeting at a gala for the National Center for Lesbian Rights.

According to the legal documents, the couple did not have a prenuptial agreement that spelled out how they would divide their marital assets in the event of a divorce. They will therefore split their marital assets 50/50. The pair have no children together (Embry has two daughters Haden and Chase).
Lynch is also filing to terminate the court's jurisdiction to award Embry with spousal support, formally called alimony, , TMZ reports. The actress, who currently stars on the Broadway production of Annie: The Musical, has already moved out of their shared Laurel Canyon home in Los Angeles, California
Posted by ichbinalj at 8:14 PM