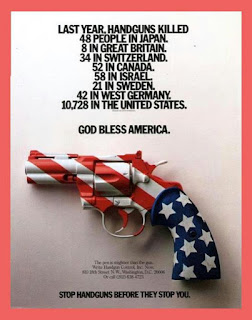 IF guns don't kill people, BUT people kill people, THEN what kind of people kill people? What kind of people are ready, willing and able to kill people. People with no love of God in their hearts and no knowledge of God in their head.
The debate that is raging misses the point. All the legislation in the world will not stop cold-hearted people from killing each other. A heart without God is cold.
Our education system and our politicians have failed us. Our children are not taught about God or the sacredness of human life. God is leaving us to our own devices. We were created with the ability to choose, and we have chosen to shut God out of our schools, city halls, and our homes. He has not rejected us; we have abandoned him. Now, we are killing each other. If there were no guns, we would choose the most convenient and available method to kill. We are a blood thirsty people, without God. We have become spiritually and morally bankrupt. We would rather be politically correct than morally correct.
We live in an embarrassing, politically correct culture that exalts and rejoices in the bizarre; aggressively promotes an “anything goes” value system.
We will scratch around the margins of the violent mass killings, looking to government to solve the problem, but we will accomplish nothing. We will be doing little more than rearranging the furniture on the deck of the Titanic. Without God, we can do nothing.


On the morning of December 14th, evil descended in full force on Sandy Hook Elementary School in Connecticut. Our eyes beheld a profound scene of weeping, and grieving families. Our hearts are broken; our words are too feeble to comfort the children who witnessed the bloodshed.   The mothers and fathers who kissed their children and said," See you when school is over", have come too soon, to pick up a lifeless child. The pain is deep, and will ravage their lives forever. It will scar our nation for some time. We thank all who came into this helpless situation to rescue, counsel, and comfort, for they were God's heart, hands and feet in this tragedy.
I am reminded of a similar scene described by the words of the prophet Jeremiah long ago:
"...a voice is heard in Ramah, mourning and great weeping, Rachel weeping for her children and refusing to be comforted, because her children are no more."
Like the Psalmist, I raise my voice to God and ask, "Why have you abandoned the children and teachers?" Yet a small voice in the midst of my anguish, reminds me that God was weeping, and in deep mourning that day as well. With outstretched loving hands, He received the souls from Sandy Hook Elementary school. He is wrapping Himself around the grieving families, and will remain so as long as they hunger for comfort.
There’s something terribly wrong. Something stinks. Something is rotten in America.
Something is causing young loners to pick up guns and slaughter people.
Cops, psychologists, sociologists, politicians and various other talking heads will jabber incessantly about why they think a young man snapped and killed a bunch of bubbly young children who were looking forward to Santa Claus.
They will offer their opinions on what they think can be done to stop future psychotics from committing mass murder. They all will be guessing.
Some blabbermouths already are using the Connecticut school massacre to promote their anti-gun agenda even though more gun laws won’t prevent a psychotic from getting a gun and killing us.
Others will say we need even more security in schools. While this may be true, other mass slaughters have occurred at restaurants, shopping malls, churches and movie theaters. Violence can strike anywhere at any time.
Some will argue we don’t have enough mental health treatment programs, while others will argue that we can’t violate the privacy and civil liberties of the mentally ill.
Others will blame video and computer games and the entertainment industry. They will argue that a constant stream of graphic violence turns some disconnected young men into bug-eyed, raving lunatics who commit mass murders.
They will all be scratching around the margins of the problem, possibly afraid to admit the truth, rather than cutting to the heart of the matter.
The heart of the matter is that our Humpty Dumpty culture has taken a great fall.
Like an iceberg, we only periodically see the psychotic manifestation, the tip of our shattered culture, but what lies just beneath the surface is a gigantic cultural cancer that is rotting America from within.
The ugly and dangerous truth is that we live in an embarrassing, politically correct culture that exalts and rejoices in the bizarre; aggressively promotes an “anything goes” value system; and vilifies, condemns and mocks traditional societal values and customs at every opportunity.
We’ve embraced a culture of contempt that attacks the very institutions that make for a healthy and strong society, and then we’re shocked when it spirals out of control. The only thing I’m shocked about is that anybody is shocked.
More laws and more restrictions won’t fix our culture. The problem we face is much deeper and more insidious. What ails us is a spiritual bankruptcy of cultural values that actually matter. More laws and restrictions can’t cure that.
Until we admit what’s at the heart of the matter, we will continue to put a Band-Aid on gaping wounds and try to convince ourselves we’ve done something meaningful.


As with most things, the cure to this mess begins and ends with the family. Traditional family values have been under siege for decades by our culture of contempt. In the absence of a solid family, the whole thing slowly unravels and rots.
Our greatest fear should be that we’ll scratch around the margins by looking to government to solve the problem  . With the best of intentions, our government will hold commissions, write lengthy reports and pass a new law or two. Like we always do, we’ll then move along, convinced that we’ve done good and pretending we actually accomplished something.
Meanwhile, somewhere in America, another bug-eyed young man is planning the next massacre.