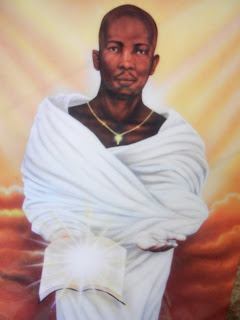 A prominent Black pastor, Bishop E. W. Jackson Sr., President of the group STAND, Staying True to America’s National Destiny.
It is time for Black Christians to have the faith and courage to refuse to associate with the Democratic Party that has become anti-Christian, anti-Israel, anti-Church, anti-Bible, anti-life, anti-family and anti-God. In addition to a litany of other short comings, it is becoming painfully apparent that ‘Calculus’ is not a course that would be found on Barack Obama’s college transcripts–if ever they would be released–when he finally came out in support of ‘same-sex marriage,’ to open the purse strings in the Lesbian, Gay, Bisexual, and Transgender (LGBT) community–just before attending a big fund raising dinner hosted by actor George Clooney in the summer.
Now comes the cost/benefit calculus…
What can Obama expect to win by embracing the LGBT community?
The net statistical result of that move was to pitch for the vote of some portion of the 1 percent of gay households in America, as identified in the 2000 U.S. Census that was referred to in the first LGBT section of the 2010 U.S. Census document. It is important to note that the racial breakdown in the gay community closely resembles the general population, except that only 8 percent were black, versus 13.1 percent of general population, while whites made up 78 percent of the gay households.
As to the voter turnout rate and party affiliation in the gay community there does not seem to be a plethora of data, except for alleged exit poll data from the 2004 and 2008 presidential races, wherein 25 to 27 percent of self-identified LGBT voters claimed they voted Republican implying, at most, that 60+ percent were Democrats and Independents.
Therefore, even if we assumed a White voter turnout rate of 78 percent, and assumed that 63 percent of the gay community is Democrat and 27 percent are Republican (supported by the existence of the gay ‘Log Cabin’ Republican group), the best case expected vote benefit to President Obama would be just 0.49 percent.
On the flip side, what can Obama expect to lose by embracing the LGBT community?
According to Jerome R. Corsi’s September 21st article in Black Christian News, it could President Obama the election; because that singular move ‘broke the camel’s back’ for a nationally prominent black pastor, Bishop E. W. Jackson Sr., President of the group STAND, Staying True to America’s National Destiny.
Jackson is calling on all Christian African-Americans to leave the Democratic Party en masse.
President Obama and Attorney General Holder have decided not to enforce the law of the land and uphold the rule of law when it comes to the Defense of Marriage Act (DOMA). The White House and DOJ have decided to shirk their responsibilities and violate their oaths of office and refuse to enforce DOMA in order to advance the President's liberal homosexual social agenda. Since the repeal of the  Don't Ask Don't Tell (DADT) policy in the military, the white House and the Pentagon have use the armed forces to advance the same sex marriage agenda of the homosexual sexual agenda. Military chaplains who refuse to perform same sex marriages are being forced out of the military. These chaplains believe marriage is only proper between a man and a woman.
Military chaplains are among the most affected by Obama's social activism. they are being forced to resign, threatened with early retirement, or transferred to very undesirable locations because of their moral beliefs and their consciences which will not allow them to perform immoral ceremonies.
A federal court is required to enforce the law of the state where it is located. The laws of marriage are controlled by the individual States. When DADT was repealed the DOD promised that State laws would be upheld when it came to marriage and civil unions. In May 2012 a homosexual marriage-like ceremony was performed at Fort Polk Louisiana. This was a clear violation of State law (Louisiana) and Federal Law (DOMA).  Louisiana law bans homosexual marriage and civil unions. They are not recognized in Louisiana regardless of where they are performed. Even those performed in other states are not legal in Louisiana.
The military should not be exploited in order to challenge marriage laws in the remaining 44 States that have not lost their sanity and allowed homosexual marriage. Despite Obama and Holder's unilateral refusal to enforce the law of the land, DOMA still remains the supreme law of the land. It is mandatory that the DOD follow the DOMA that defines marriage as a union between a man and a woman.
The President's focus as Commander in Chief should be on advancing the best interests of the service members. This one factor is believed to have contributed to the alarmingly high rate of suicide among service members. Our brave men and women deserve better. Our supportive dependents waiting at home for their loved ones in the military deserve better.

"COME OUT OF HER MY PEOPLE"
This is the first time there has been such a political realignment since the 1960′s, when the black community deserted the Republican Party (which ended slavery), in favor of the Democrat Party to support President Lyndon B. Johnson’s ‘War on Poverty.’
The National Urban League released a report in July titled, “The Hidden Swing Voters: Impact of African-Americans in 2012,” which concluded that if the national turnout rate of African-American voters went back to the 2004 rate of 60 percent, instead of the 65 percent who turned out in 2008, Obama could lose the election.
Corsi also confirmed that African-American voters ‘were a deciding factor’ in Obama’s 2008 victories in North Carolina, Virginia, Indiana and Florida.

However, at this time President Obama has already lost Indiana by every measure, and polling continues to show that North Carolina is not in the cards for him in 2012 either–highlighted by the fact that the state passed a law banning ‘same-sex marriage’ by a wide margin–just months before the Democrat National Convention was held in Charlotte.
Jackson says black Christian ministers have begun resisting the Obama administration’s determination to advance an LGBT agenda, and that they are here to say the Democratic Party has shown itself to be so inimical to the biblical values of Christians and Jews that it is time for a mass exodus.


The Democratic Party has turned its back on us; it’s time to turn our back on them.

As President Barack Obama has proven beyond a shadow of a doubt that he is a terrible decision maker–should we be surprised now?
The ‘end of an error’ is near.
Amen.
(By: Jeffrey Klein)
Posted by ichbinalj at 9:27 PM