Gaddafi Is Now A Martyr.

Gaddafi died at the hands of an angry mob aided by a French air strike. It was a shameful spectacle. There is no law and no order in Libya. Shame on the NTC. It was a lynch mob. Gaddafi was captured alive. He deserved a trial. Such barbarism is ample evidence of how far man has progressed in his attempt to civilize himself. God help us.

Gaddafi was trying to flee the city in a convoy of cars when they came under attack from NATO jets. The French claimed responsibility for the airstrike. Charred remains of 15 pickup trucks lay burned out on a roadside where Gaddafi's convoy had attempted to punch through NTC lines. Inside the ruined vehicles sat the charred skeletons.

Unlike Saddam Hussein of Iraq, who was hanged, Gaddafi died on his feet, standing up and fighting back.

"While he was being taken away, they beat him and then they killed him," a senior source in the NTC told Reuters news agency. "He might have been resisting."

Officials said Gaddafi's son Mo'tassim, also seen bleeding but alive, had also died. Another son, heir-apparent Saif al-Islam, was variously reported to be surrounded, captured or killed as conflicting accounts of the day's events crackled around networks of NTC fighters rejoicing in Sirte.

French President Nicolas Sarkozy, spearheaded the Franco-British move in NATO to back the revolt against Gaddafi.

Shortly before dawn prayers on Thursday, Gaddafi, surrounded by a few dozen loyal bodyguards and accompanied by the head of his now non-existent army Abu Bakr Younis Jabr, broke out of the two-month siege of Sirte and made a break for the west.

But they did not get far.

NATO said its warplanes fired on a convoy near Sirte about 8:30 a.m. (2:30 a.m. ET), striking two military vehicles in the group, but could not confirm that Gaddafi had been a passenger. France later said its jets had halted the convoy, which was comprised of some 80 vehicles.

By averting a possible dispute in Libya and internationally about where to try him, and denying him a final platform for his trademark lengthy speeches, the summary killing on a desert road is very troubling and unworthy of great powers.

"Gaddafi is now a martyr and thus can become the rallying point for irredentist or tribal violence -- perhaps not in the immediate future but in the medium-to-long term," said George Joffe, a north Africa expert at Cambridge University.

"The fact that NATO can be blamed for his death is worrying, in terms of regional support, and may undermine the legitimacy of the National Transitional Council."

At the end his so-called friends and allies of convenience deserted him, like Jesus' disciples and friends before his crucifixion.

The death of Gaddafi is a setback to campaigners seeking the full truth about the 1988 bombing over Lockerbie in Scotland of Pan Am flight 103 which claimed 270 lives, mainly Americans, and for which one of Gaddafi's agents was convicted. 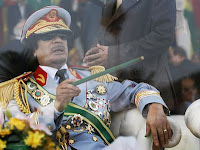 In the end all of his friends deserted him. US President Barack Obama (R) and Libyan Leader Moamer Kadhafi shake hands during the Group of Eight (G8) summit in L'Aquila, central Italy, on July 9, 2009.

Gaddafi at the G8-SUMMIT was with them but not of them.
Posted by ichbinalj at 8:09 PM